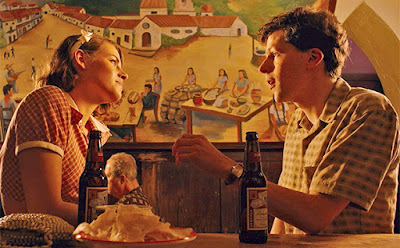 I walked into Cafe Society knowing practically nothing about the film. I knew the principle cast and I knew it was written and directed by Woody Allen--that's all I needed to know. Despite the controversy surrounding his personal life, Allen is a great director and an even better writer. I love his style of films, and when I heard he made Cafe Society, I made up my mind to see this movie without having even seen a trailer. For me, that's unusual. So I didn't know anything about the plot at all. And that was something I very much appreciated. Look, this is a review so I'm going to tell you a little bit about the plot. That's standard issue. But, like all my spoiler-free reviews, none of the twists or turns will be spoiled here. So I walked into Cafe Society expected a good movie, and what I got was a great one. This is a fantastically written film, with a tender core led by powerful and charismatic performances.

The son of a poor Jewish family, Bobby Dorfman (Jesse Eisenberg), moves to Hollywood in order to get a job from his movie mogul uncle Phil Stern (Steve Carrell). There, he meets and falls in love with Stern's secretary, Vonnie (Kristen Stewart), who has her own problems when dealing with conflicting affections for this awkward, passionate kid and her older, wealthier boyfriend. 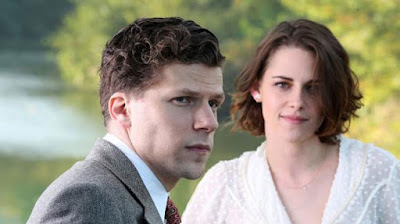 There is an excellence you come to expect with the writing in Allen's movies, and it's all here. His dialogue is witty and wise. It flows elegantly out of the mouths of his characters, who are all three dimensional. There's a glossiness to his writing, and a style that is just so damn charming. You become sucked into this world because of how well he writes. Allen does a great job directing too, don't get me wrong, but his writing stands out to me above the rest. When you watch this movie, it really feels like a play in the way that it's written, the way it flows and the way it's presented. That's not a bad thing at all. Instead, it enhances the film. It recaptures this older aspect of film that was more theatrical way back. This feels like a movie that should have been made in the 1970's, in the best of ways.

The performances are all top notch as well. Steve Carell is great as Phil Stern, and doesn't bring his usual Steve Carell goofiness. I wasn't watching Michael Scott from The Office. I was watching an actual, genuine character on screen, and that was great to see from Carell. Corey Stoll has a great, smaller role in this film that really lets him shine. His character has a lot of great comedic moments, and even though he's not given a lot to do, he makes the most with what he is given. Blake Lively is also great in her role, which I won't go much into. But the two central performances were from Jesse Eisenberg and Kristen Stewart. With both these actors, I have always felt they were flat, one-dimensional performers. But they both bring something to this film. Eisenberg proves he can do a good job if he plays a certain kind of character and works with a really good actor (case in point, The Social Network). And Stewart has been proving herself to be a good actress ever since she finished the Twilight franchise. Both these actors were rather unproven commodities and could have held the film down, but instead they elevated it. 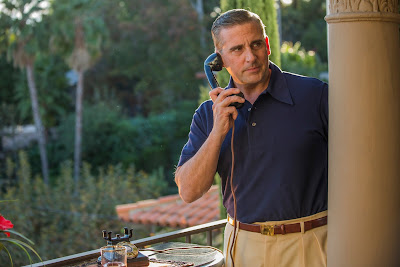 The movie's main problem for me is that it drifts through time a little too quickly. We spend so much establishing these characters and then it suddenly propels itself an unknown amount of time ahead. I was a little bit lost, since the narration gave no true indication of a time jump, and none of the characters visually aged. This area could have been done better, to make this time jump more understandable. I also felt that the movie glossed over the initial relationship between Eisenberg and Stewart. It told us it was there, but it only ever showed us it one way. We didn't see much of it the other way. And then we're supposed to buy into it being impactful and profound in both of their lives down the line. It just needed to develop this a bit more in the first half of the film, so that the stakes in the second half made more sense. It's hard to explain without getting into details, but you'll understand when you see the movie yourself.

Overall, Cafe Society is an excellently written film that delivers on great performances. Woody Allen incorporates his witty banter and glossy writing that embellishes the movie. Jesse Eisenberg and Kristen Stewart give surprisingly dynamic performances, and prove they can be really good when given the right characters and a great director. The supporting cast are all great as well. However, the time jump in the movie was a bit muddled, and could have been explained better. Also, the importance of Eisenberg and Stewart's relationship in the first half of the film could have been fleshed out more, so that the second half had more stakes. But in the end, Cafe Society is a very entertaining movie, and is definitely one to check out! 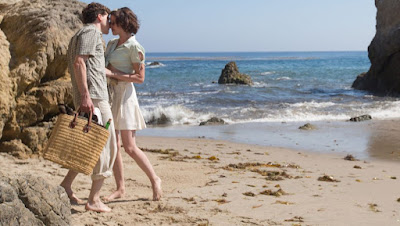 What do you think? Have you seen Cafe Society? Did you like the film? Leave your (spoiler-free) thoughts in the comments section below.