Anyone who has read my site for a while knows that Christopher Nolan is my favorite director. From The Dark Knight to Inception to Memento to The Prestige, Nolan just knows how to build fantastic films. He's a brilliant storyteller, both with the visuals and with the actual substance of the movie. So anytime he has a new movie coming out, I'm immediately hooked. 2014 saw the release of Interstellar, which may not be at the top of my favorite films by Nolan, but it was really good nonetheless. But when news came about of Nolan's new picture, Dunkirk, I became very intrigued based on one defining detail: it's so radically different from anything else Nolan has done. Sure, it will be dark like all his other films and have a similar tone, but Nolan has played in the science fiction realm for a while now. Doing a war movie like this is different than anything he's done before, and that alone is exciting.

Now, I didn't know we were getting a trailer for Dunkirk anytime soon. And then boom: it drops. This is absolutely a teaser trailer. It has only a few shots, and half the trailer is just telling us all the movies Nolan has made. But still I liked it. From what we saw, the shots look gorgeous. The cinematography is done by Hoyte Van Hoytema, who also did Interstellar. Visually this looks fantastic. And the music was quiet, but haunting. It stays with you. Look, this trailer doesn't show us much. We didn't even get to see any of the leads. It was simply a small teaser that just informed people that Nolan has a new movie coming out. And from the shots we did see, this looks and feels like a Nolan movie. I'm more excited for the full length trailer, though we won't see that anytime soon, since the film doesn't come out until next summer. But for what this trailer was, I liked it. 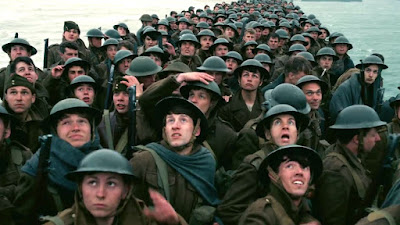 What do you think? Did you like the trailer for Dunkirk? Are you looking forward to seeing the film? Leave your thoughts in the comments section below.