Rogue One: A Star Wars Story stands as one of the most anticipated film of the year. It will take us back to the days before Star Wars Episode IV: A New Hope, and let us see a whole new cast of characters. The Gareth Edwards directed feature has the potential to be the true Star Wars prequel, and to continue the greatness that J.J. Abrams began with Star Wars Episode VII: The Force Awakens. I really liked the first trailer. It was brief, but it really built up the film and gave us a lot to talk about. It was very well done, and I appreciated it for what it was. But the second trailer is always supposed to build upon the first, by giving us more story details, bigger glimpses at action scenes and really win audiences over. And with Rogue One, it had to show us Darth Vader. And now we have our second trailer for the film.

This is a really solid trailer. We get to hear a lot more characters talk, and we find out more motivations. I really liked the extended look we got at Forest Whitaker. It gave us a few more bits and pieces of the plot, but we already picked most of that up from the first teaser. It gives us more glimpses of the action. Is it an extension of the first trailer? Yes. But is it better? I don't think so. We got more from this trailer, but I think I liked the first one better. It had a lot more punch to it, with amazing shots revealing the AT-ATs and the screeching soundbit in the background. This trailer just doesn't have that same power to it. It feels a bit more generic and by-the-books. And as for the Darth Vader reveal... we see practically nothing. We hear him breathe and we see the back of his helmet for less than a second. They should have extended it for a little longer, and at least have him turn around. This trailer delivered on expanding upon the first, but as for being a better trailer, I think it falls short of the first trailer. And Vader's reveal ultimately was a bit disappointing. Regardless though, I can't wait to see this film! 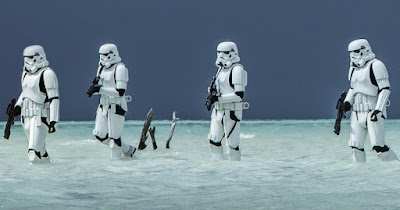 What do you think? Did you like the trailer for Rogue One: A Star Wars Story? Are you looking forward to seeing the film? Leave your thoughts in the comments section below.