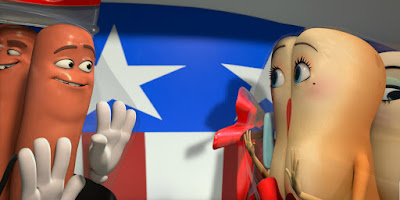 Sausage Party may just take the prize for best trailer of the year, because back when the first redband trailer came out for this movie, it was absolutely genius. It was initially set up as a Pixar kind of movie, and then quickly changed into an R-rated horror movie, with anthropomorphic food being ripped in half, skinned, sliced and diced, and more. It was a perfectly edited trailer, and really put expectations for the film through the roof. Seth Rogen and his gang have been on a roll with their comedies, knocking it out of the park almost every time. So a movie about food discovering the truth about what happens when they leave the supermarket seemed like a brilliant film for them to tackle. I can't stress how high my expectations were, but I knew I would be disappointed to some extent. It wasn't going to be a perfect film. So I went in super excited, but knowing it wouldn't meet my expectations. And it didn't. Sausage Party is a funny and enjoyable movie, but it just isn't as good as I wanted it to be.

All food in the supermarket want to be chosen by the humans, which they deem as gods, so that they can go to the Great Beyond-- a food heaven where the humans will love and care for them. But they soon realize that this belief of theirs isn't real, and there's a complete different reality for food that goes home with a human. 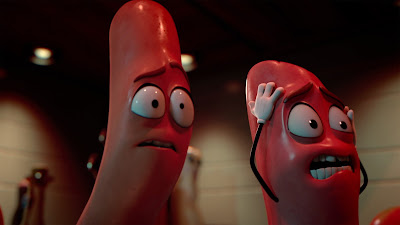 This is a very creative and innovative film. It takes the best qualities of Pixar movies and gives it an R-rated spin. I love it in Pixar movies when they give us a new perspective on something we all know and understand. Like in Finding Dory when Dory has to navigate the touching pool, where fingers are flying in from all different directions, but from our perspective kids are just touching the fish. That kind of perspective flip is what makes these films funny, and Sausage Party definitely adapts that. It turns humans eating food into a horror movie, and it is hilarious. I will say up front that one of my big negatives is that this element of the movie isn't overly explored, and what you seen of the food being tortured in the trailer is really what you get in the film. There's not a lot more to it, because the movie has an entirely different focus.

Without going into spoilers, the film is about Frank (Seth Rogen) and Brenda (Kristen Wiig) being separated from their packages and traveling around the supermarket, going into all the different aisles and meeting and discovering all the different kinds of food. While this was entertaining to watch, it wasn't the movie I wanted to see. But I'll get into my negatives later. This film is definitely creative, and it is very thoughtful in what nationalities to make each food, the different kind of satirical metaphors they can use to apply to our real world. Sausage Party has some great laugh-out-loud moments, but it's more of an interesting movie to watch for the satire. You're not laughing at every other sentence like some other Seth Rogen comedies, but you are watching it to appreciate the thought that went into making all the pieces come together. 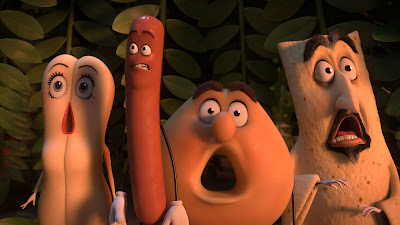 The voice cast is also phenomenal. Rogen and Wiig aren't overly innovative as the leads, but they serve their purpose. It's more the supporting cast that stands out. Bill Hader is great as the exposition-heavy Firewater, and really elevates what could have been an ordinary character. James Franco has a small but memorable role as a druggie who has a completely unique experience with some of the food, and it is a great scene. Nick Kroll plays the Douche, and though his character was used a bit too much in the film and began to get old, his voice performance was great. But Edward Norton stole it for me as Sammy Bagel Jr. He had some of the best lines, and had a very unique and different voice from the rest of the cast. Really, he was the best part of the film for me.

The negatives for me is that this is a different movie from the one I was expecting. I thought the essence of this film was all the food going home with the humans, learning the truth, and trying to escape in the fashion of Toy Story. But that's not what we got. The focus of the trailer was a very small part of the film, and it was more about exploring the supermarket. While this was entertaining to watch, it wasn't what I wanted the movie to be, and that was disappointing. It also isn't consistently funny. It has some great moments, but the jokes are really spread out. So while what you're watching is entertaining, it isn't the gut-busting, rolling on the ground hilarious comedy the trailers made it out to be. Like I said before, it is more creative and satirical than it is laugh-out-loud funny. 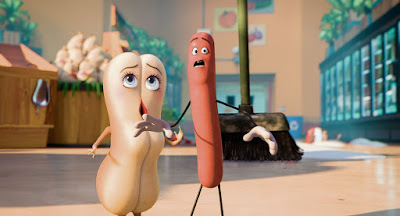 Overall, Sausage Party is a funny movie, thought the jokes are few and far between. The trailers are misleading in letting you think the focus of the movie is one thing, when it is really something else. And though it is still entertaining to watch, it's not what you want the movie to be. The movie is without a doubt creative and satirical, and it's these elements that the film excels at. It just doesn't work as a gut-busting comedy. The voice cast is all phenomenal, and really elevate the film. The very end of the film is an insane scene that I won't spoil, but it is absolutely crazy and is probably the best scene in the movie. If you didn't know it was coming, you're jaw will definitely be on the floor. It's just crazy. However, in the end, Sausage Party is disappointing in that it didn't meet my uber-high expectations. But it is still a movie worth checking out, and once you realize what it's trying to be, it succeeds at just that.

What do you think? Have you seen Sausage Party yet? Did you like it?  Leave your (spoiler-free) thoughts in the comments section below.