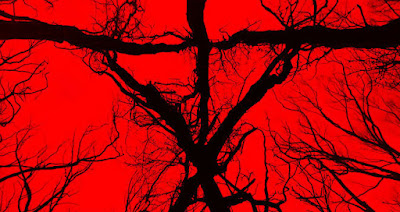 Blair Witch is a movie I've been really looking forward to the past couple months. Up until San Diego Comic Con this year, it was known as The Woods, and had no connection to The Blair Witch Project. Then, at Comic Con, they screened the film and revealed its true nature as a sequel to Project. Coming out of that screening, critics were raving about just how good this movie was. So, as a fan of the original, of course I was excited to see this film. And this has also been a really good year for horror movies. I'm not usually a fan of the genre, but 2016 has had some especially good ones, including The Conjuring 2, Lights Out and Don't Breathe. So with all of this combined, I was expecting a great movie. But with the recent update on the Rotten Tomatoes, its score has dropped considerably, along with my expectations. But in hindsight, lowering my expectations was a good thing. Blair Witch is definitely better than its critics score, but is not nearly as good as initial reviews, made it out to be.

After footage from The Blair Witch Project makes its way online, James (James Allen McCune) believes that the girl in the video is his long-lost sister, Heather. He and his friends embark on a journey into the Blair Woods to try to find the house shown in the video, and let's just say things don't go according to plan. 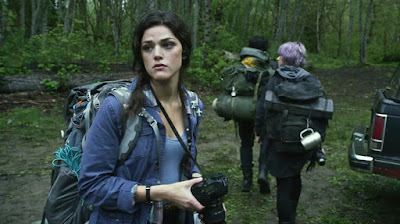 Let me just say that I really liked the original film. I didn't watch it when there was still the thought that it was real; I watched it after the fact, but that didn't stop me from enjoying the movie. It's probably the best use of found footage to date, and it was effective in being creepy as hell without showing anything! Blair Witch is essentially a remake of Project. Somethings it does to mirror the original are adequate, some are very good, and some ultimately fall flat. The performances in this film were all really good. They weren't as shockingly believable as Project's performances were, but that didn't matter. This wasn't trying to convince the world it was real. For horror movie standards, the acting was excellent. For real world standards, it was good enough for me to not roll my eyes. And believe me, for horror movies, that's really saying something!

Blair Witch also introduced a lot of cool new tricks for found footage movies, with new and practical ways for these people to capture really dynamic shots. They set Lisa (Callie Hernandez) up as a film guru, so it made sense that she had all these innovative types of cameras. Where a teenager has the money to get all this equipment is completely out the window, but it was effective nonetheless. Using ear cams and camera drones, Blair Witch added a lot of really cool shots, with plausible means for them to be captured in the bubble fantasy that all this footage is in fact real. And I cannot praise the last half hour of this movie enough. I'll get into my thoughts on the first hour later, but the last half hour takes quite a sudden turn, and it's terrifying. I was pretty much watching through my fingers the whole time. It does what the entire sequel should have done: it took elements of Project and expanded upon them in innovative ways. 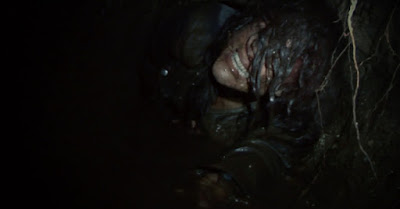 My problem with the movie is that is in fact a beat-by-beat remake of the original. It follows all the same steps and, like I said before, doesn't capture some of these steps as well as the first did. The dangling stick things (for lack of better term) were terrifying in the original, but they're utterly wasted and ineffective in this one, due to a really disappointing and cop-out twist revealed that I won't spoil. They were (other than the end) the best part of Project, and they were entirely wasted in this film. The first hour of the movie involves the group just wondering the woods, but it didn't have the same effect that it had in Project. Mainly because it was just rehashing the original. I liked the last half hour because it added something new, but the first hour didn't. It honestly felt more like a remake than a sequel.

But what bothered me the most was the use of jump scares in the film. There are so many cheap scares where someone runs into something or someone yells out to someone... and this is supposed to be scary? This is littered throughout the first hour. In one instance, there were three of them back-to-back-to-back in one scene. It was to the point where I was beginning to roll my eyes every time they did a new one. What they didn't realize is that you can have genuine scares in the beginning, but through the atmosphere. That's what Project did so well. It didn't show you a single thing, but it slowly and meticulously twisted the environment into something completely terrifying. And instead of realizing that genius aspect of the original, Blair Witch settled to pass time with cheap, fake jump scares until they could get on to the real horror. And that was very disappointing. 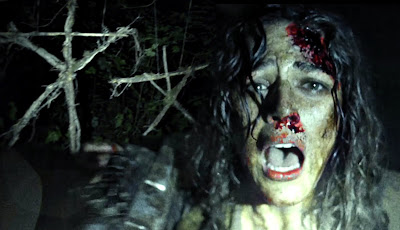 Overall, Blair Witch is a good movie. It essentially copies The Blair Witch Project beat-for-beat, but it adapts some of the elements well. The acting is really good, and is especially good for horror movie standards. The last half hour is also fantastic, and is the most innovative part of the movie. This was the point where the film really picked up and locked me in. However, the first hour of the movie is essentially the same film as Project, but not done as well. One of the best elements of the original film is entirely wasted in this movie, and it doesn't nearly capture the slowly building tension that the original did so perfectly. Instead, Blair Witch settles to give us cheap jump scares, which get old really quick. In the end, Blair Witch isn't as good as the original, nor is it as good as I initially wanted it to be. But it serves its purpose as a good horror movie which may not rank as high as the others this year, but definitely earns its name in the "good" pile rather than the "bad" one.

What do you think? Have you seen Blair Witch? Did you like the film? Leave your (spoiler-free) thoughts in the comments section below.