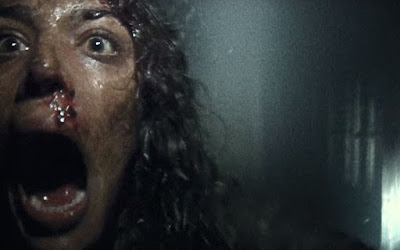 While Blair Witch didn't turn out to be the revolutionary horror movie everyone hoped it was going to be, it wasn't a bad sequel. It may have copied the original plot point for plot point, but it also tried to expand on the mythology. And this was the best part of the film, in my opinion. You can read our full review of the movie here. Before I go any further, I am just going to warn you that there are spoilers for Blair Witch in this article. So if you have yet to watch the movie, go see it and then come back to this article later.

So when Lisa (Callie Hernandez) is in the house at the end of the film, we see a few flashing seconds of a white figure in the background that was scary as sh*t! I jumped in my seat when we saw it at first. It was creepy as hell. And everyone coming out of the movie unanimously believed this to be the Witch. I didn't think there was any doubt. And while we didn't see much of it, what we did see was terrifying, and I was all for this being the Witch. But according to a Twitter exchange involving writer/producer Simon Barrett, this white figure was not actually the Witch. You can read the conversation below: 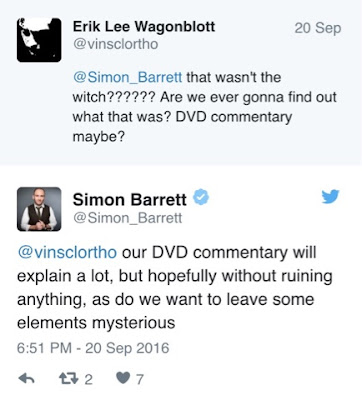 I don't know what to necessarily think about this. On one hand, it's creepy that that terrifying thing we saw wasn't even the Witch. That was something else. Could it possibly be a transformed Heather from The Blair Witch Project? Could she have been in that house in the time loop for so long that she transformed into that demonic monster? The fact that Barrett says that the white figure was "someone else" not "something else" gives credence to that, but who knows? However, on the other hand, it's kind of anticlimactic. If this is the last Blair Witch movie we're seeing, then I'm kind of upset that we didn't actually see the Witch. But maybe we'll get another one, and they'll explore that more down the line. If that's the case, then I'm all in. But if this is it, and that white figure is all we get and that's not even the Witch, then I feel a little let down. I guess we'll have to wait and check out that DVD commentary to find out the full story.