I didn't even hear about this film until today, when I read that a trailer had dropped for it. I saw that it was a film starring Will Smith coming out around December, and my immediate thought was that this was another turn of his for an Oscar. He was absolutely brilliant in Concussion last year, and I thought he was robbed of a nomination. I would have put him in for Best Lead Actor over Matt Damon for The Martian, personally. Smith is an actor who, when he wants to turn it on, is a masterful performer. He doesn't always do great movies, but I usually enjoy him when he's on screen. But aside from the movie starring Smith, I knew nothing about Collateral Beauty. So I pressed play on the YouTube video, and I was instantly blown away!

I can already tell this will end up being one of my favorite movies of the year, and one of the best movies of the year overall. This trailer was incredible. Smith looks like he is giving another Oscar-level performance, but it's not just him. It's the rest of the ensemble as well. Edward Norton, Kiera Knightley, Helen Mirren and Kate Winslet-- these are all powerful actors, and all look fantastic in this movie. Director David Frankel may be a more unconventional choice for making an Oscar caliber film, but keep in mind that Tom McCarthy directed The Cobbler the same year that Spotlight won Best Picture. And the writer, Allan Loeb has done some really good work. He wrote The Switch, which I just watched last night and really loved. I also think the story sounds fascinating. It's reminiscent in a way of A Christmas Carol, but told in a completely new and different way. Look, this movie may not end up being as good as I'm thinking it will be, but it has all the makings to be an incredible movie, and to be one of the major Oscar contenders this year. 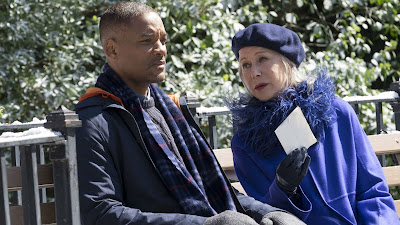