Denzel Washington is a fantastic actor. In everything he does these days, he gives a hundred percent. He just starred in The Magnificent Seven this past weekend (you can read our review of it here), and he was great in it. Washington knows when just to be fun and to be a badass, and when to bring the power and the emotion, and it looks like that's what we're getting with his next film, Fences. It's the film adaptation of a play of the same name that Washington and Viola Davis both starred in on stage, and now they are bringing it to the big screen, with Washington directing. I hadn't really heard about this movie, until I saw that the trailer had been released online. And upon finding out all the backstory I relayed above, I was eager to see this trailer.

I loved this trailer! I think there's something quite special about adapting plays into films, because there's such a simplicity to plays... it just works really well on screen. Washington and Davis both look phenomenal in their roles, and I think there are going to have interesting ramifications in the film, since they have both played these roles so many times before in performing the play. And I think that familiarity with the source material will greatly help with Washington's direction. This movie comes out Christmas Day, and I think it's a fair assessment that this movie could be in the running for some Oscar consideration. From the trailer alone, it certainly has the looks for it. Whether it will end up being that good is unknown, but the Oscar friendly release date is definitely reassuring. Look, I really liked this trailer, and I think that Fences could end up being a big Oscar contender. We'll just have to wait and see. 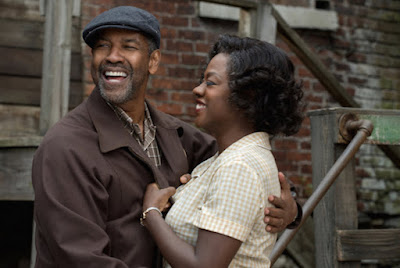 What do you think? Did you like the trailer for Fences? Are you looking forward to seeing the film? Leave your thoughts in the comments section below.