Passengers is a movie I've been fascinated with ever since I initially heard about it. First of all, Jennifer Lawrence and Chris Pratt are two of the biggest and most popular names in the industry today. Lawrence has already proven herself to be one of the most talented actresses working today, but Pratt has yet to truly prove his acting chops. He's an awesome guy, and I love him in Parks and Recreation, Guardians of the Galaxy and Jurassic World, but he has yet to show on screen that he can be more than an action star or the funny dumb guy. I've been waiting for him to show his dramatic ability, and this seems like a project where he could really surprise us. Plus, the film is directed by Morten Tyldum, who did a brilliant job with last year's The Imitation Game. So with all of these factors combined, I've been really excited for this film. And now we finally have our first trailer.

I liked it a lot. It didn't necessarily blow me away, but it was a good first look at the film. The trailer does definitely rely on the star power of Lawrence and Pratt more than anything, but it does give us a (albeit brief) look at the plot. The initial premise is incredibly interesting: two people wake up in on a space mission from their hyper-sleep 90 years earlier than they should have. It's kind of like if Alien was a romantic comedy, and didn't have any Xenomorphs in it. Now that I think about it, that movie would suck, but I'm still excited for Passengers. But there's a slight tease at the end of the trailer, where we hear Pratt's character say "There's a reason we woke up early...", that shows there may be a little bit more to this movie than what we see at the surface. Like I said, I wasn't blown away by the trailer, but I have high hopes for this film and I am very excited to check it out. 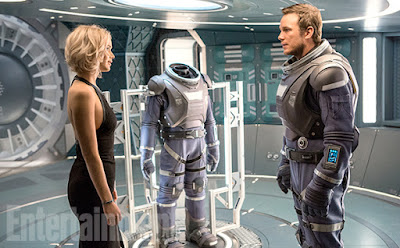 What do you think? Did you like the trailer for Passengers? Are you looking forward to seeing the film? Leave your thoughts in the comments section below.