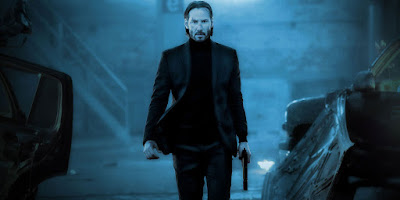 John Wick is a movie that I missed in theaters, and I wholeheartedly regretted it once I finally saw the film. It's a kickass movie that proves to be the return of Keanu Reeves. He may not be the best actor overall, but he is an incredible action star. The Matrix is my favorite movie of all time, and he was absolutely brilliant in that film. And John Wick proved to be a throwback to those kinds of films. It was slick, smart and brutal. So since I saw the first one, I've been really looking forward to seeing the sequel. We've known that another one is coming, but we haven't heard many details about the plot, actors or when it will be coming out. All we've heard is that it will be in 2017 at some point. However, now we have our first look at the movie, along with an official release date.

The first poster for John Wick: Chapter Two has been released, which also confirms the release date to be February 10th, 2017. You can view the poster below: 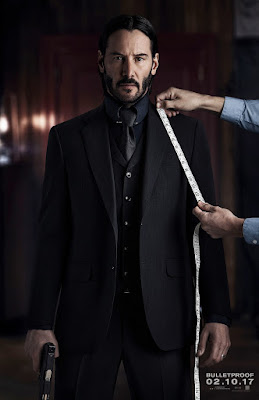 I like this poster. It's very simple, and very similar to the poster for the original film. But I do like the added little touch of his suit being measured as he stares the camera down. But what stood out to me more than the poster itself was the release date. February is proving to be a very viable month for brutal, R-rated action films. Last year saw the release of Kingsman: The Secret Service, which was incredibly successful. And Deadpool made even more money this year. Following in those footsteps, releasing Chapter Two in February is a very smart decision. Plus, it's just a couple days away from my birthday, so I always get excited when I find out a cool movie is coming out around then. But I do have to quick say that I absolutely hate the subtitle "Chapter Two". I do prefer subtitles over regular numerical listings, but I would have preferred John Wick 2 over that stupid subtitle. I'm really hoping there's something in the film that gives this subtitle meaning. Because if there isn't, they might as well have named it John Wick: The Next One, or John Wick: The Sequel, or something else that's equally as ridiculous.

What do you think? Do you like the poster for John Wick: Chapter Two? Is February 10th a good release date for it? Do you like the name for the sequel? Are you looking forward to seeing the film? Leave your thoughts in the comments section below.