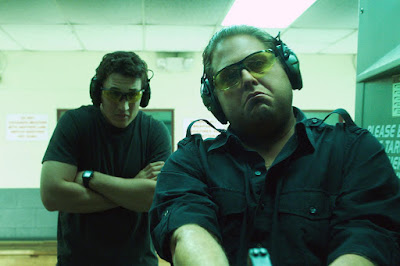 War Dogs was one of my most anticipated films of the summer. After Suicide Squad, it was my most anticipated of August (yes, even before Sausage Party). But the weekend that the film came out, I happened to be away on vacation and I never got a chance to see it. But luckily, I was able to catch it yesterday, the last day the movie was showing at the local theater near me. You have to understand, I was through the roof excited for this movie! I thought the trailers had been awesome, and they portrayed this movie as a fun, entertaining look at what's wrong in America. Miles Teller starred in my favorite movie of 2014, Whiplash, and Jonah Hill has proven himself to be a fantastic actor, both with comedy and drama. But he does his best work when he's playing a real life person, which is what War Dogs is. It's based on a true story, and that made the film all the more intriguing. So I went in with high expectations, and hopeful that it would meet them. And ultimately, it did. War Dogs has a lot to say about the politics of war in this country, but is also one hell of an entertaining ride!

David Packouz (Teller) is a low-earning massage therapist who, in 2005, was given the opportunity by his childhood friend, Efraim Diveroli (Hill) to work as an arms dealer, and make immense profit off of the Iraq War without even touching the weapons. 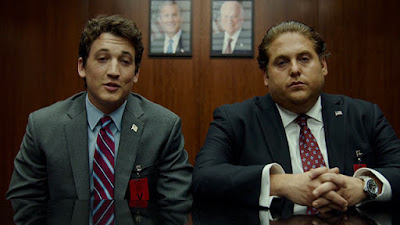 Ultimately, I'm glad that I didn't see War Dogs when it first came out, because I think my expectations would have been too high. I've had a few weeks to kind of let my expectations mellow, and then I saw it. This film got mixed reviews, and it wasn't getting the love that I thought it was going to get. But now, I don't see how people could be so mixed on this film, because, in my opinion, the movie's awesome! First and foremost, Teller and Hill give great performances. Teller is our guide through this movie, and we experience everything through his eyes. He's a relatable and sympathetic character, and you understand why he's doing what he's doing. But I thought Hill gave the best performance in the film. He's perfect as a sleazy con artist who's not afraid to get his hands dirty. You see him continuously pushing David and making him go further, and you understand their dynamic. Teller and Hill have great chemistry, and it adds a lot of fun to this movie.

And speaking of which, it was the fun that sold this movie for me. If this had been a straight drama, I don't know if it would have been as effective. You buy into these two childhood friends who are hanging out, doing drugs and living it up. You feel the adrenaline rush of them diving into these dangerous waters. Teller and Hill both brought a lot of energy to their performances, which makes this film so damn entertaining. The comedy works as well. This is not a straight comedy, like you might expect from director Todd Phillips. Instead, the comedy works for the drama in the film. It doesn't feel forced, and it comes about naturally from the ridiculousness of the situation, and realizing this is all true. Some elements may have had liberties taken, but the overall story is real, and that's what makes this movie all the more crazy. 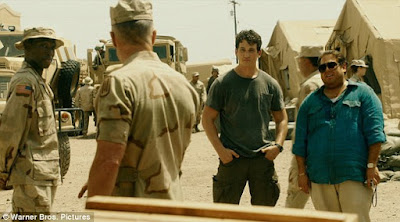 I only have a few negatives with the movie. First of all, the trailer spoiled some bigger elements of the movie, and due to this, I was able to predict how certain things were going to come together. That really bothered me. It didn't necessarily take away from my enjoyment of the film, but it did frustrate me, in that I could predict what was going to happen. But my biggest negative is with the character of Iz (Ana de Armas). I thought the relationship between her and David needed to be fleshed out more. The film tries to go to different dramatic lengths with their relationship, and I didn't feel the emotion that I should have, mainly because the film didn't spend enough time developing their dynamic. The movie spent most of its time developing Efraim and David, which I think absolutely should have been the focus of the film. But it needed more time with David and Iz for the audience to feel the punch of things that happen later in the movie. And her character was very wishy-washy in terms of her reactions to things. Sometimes she was surprisingly okay with things that were happening, and then would all of a sudden object to it. Her character needed more consistency. I have no problems with the performance. I thought de Armas did a fine job. It was just the writing of the character that needed to be fixed.

Overall, War Dogs is a spectacular movie. Miles Teller and Jonah Hill deliver on great performances, especially from Hill. They add an energy and a momentum to the film that just increases the entertainment level. The action scenes are well directed. The comedy is well infused. The dramatic bits work for the most part. And it has a lot to say about the politics of war. I found that element to be the most profound. It says a lot of capitalism, and how crazy it is that war is mainly started for private industries to profit off of, and to exploit the deaths of thousands. And this movie really exposes that dark side of our country beautifully. Bradley Cooper also has a very minimal role in the film, but is excellent in the scenes that he is in. My only real problem stems from the writing of Iz. Her character was inconsistent in how she reacted to certain situations, and there wasn't enough time spent developing her relationship with David. But in the end, War Dogs is a fun, entertaining thrill ride of a movie that is definitely one to check out! 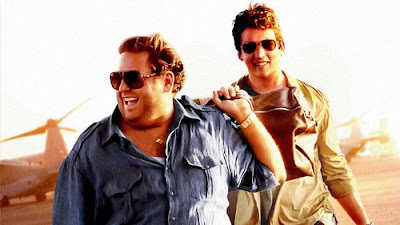 What do you think? Have you seen War Dogs? Did you like it? Leave your (spoiler-free) thoughts in the comments section below.