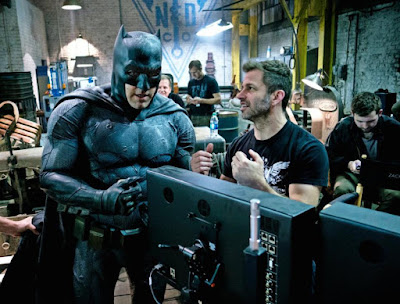 Zack Snyder has gotten a lot of hate for his turn at directing Batman v. Superman: Dawn of Justice. While the film itself was overly disappointing, Snyder is definitely not deserving of the level of hate he received. But hopefully, some good can come out of this situation. When Dawn of Justice was released, Snyder was in the final stages of pre-production of Justice League. And if the set visits from a few months ago told us anything (you can read about them here), Snyder listened to the fans outcries. Snyder has maintained that he has listened to the complaints, and is working to fix those mistakes in Justice League, which is an extremely reassuring thing to hear. But a more interesting aspect of the set visits was the reports of Batman (Ben Affleck)'s many different suits and technology that would be shown in the film. There were upgrades to the Batmobile, new vehicles such as the Flying Fox and the Nightcrawler, as well as changes to his Batsuit.

Just today, Snyder dropped a new image of Affleck as the Caped Crusader on set of Justice League in a new Batsuit, which Snyder described as his "tactical Batsuit". You can see the image for yourself below: 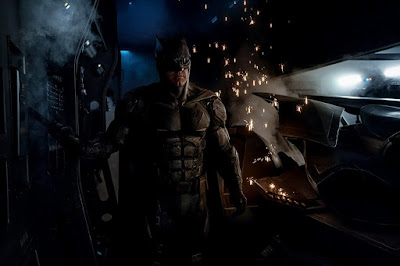 It looks like Batman just finished watching The Matrix. But I do think this looks cool. It doesn't seem like something he would wear for much of the movie. It's just something that he puts on for certain kinds of missions. But more accurately, it was designed to sell more toys. Now the toy companies can sell a whole line of "Tactical Batman" action figures and make even more money when the movie comes out. We've seen the interest in toy profits ruin comic book movies before (Batman & Robin), but I don't think that's what is going to happen here. I think there is a practical reason for Batman to wear this is certain situations, and it will be a small and rather insignificant part of the film. The glasses really remind me of Nite Owl from Watchmen, and that's who I thought it was when I first saw the image. Ultimately, though, this really isn't something that's overly newsworthy. It's just a nice little treat Snyder has given the fans of something to expect to see in Justice League.

What do you think? Do you like the look of Batman's "tactical Batsuit"? Are you looking forward to seeing the film? Leave your thoughts in the comments section below.