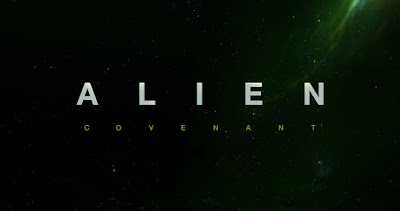 Alien: Covenant is a project that's been pretty shrouded in secrecy. We know practically nothing about it, except for the main cast. But in terms of the story, nothing is really known. The Ridley Scott film comes out early next year, and is a sequel to Prometheus, which received mixed reactions. I actually rather liked Prometheus. It's not a perfect film, but I think for what it was it was a pretty enjoyable film, and a nice re-introduction into the Alien universe that had since become pretty muddled. But for fans who were expecting another straight Alien film in Prometheus, they were disappointed. It focused more on the Engineers, and it asked more questions than it answered. But at the very end, we got our first look at the birth of the Xenomorph, and it's since been assumed that that would be the lead-in into this next film. However, for a while, Scott maintained that there would be no Xenomorphs in Alien: Covenant, back when it was simply called Paradise Lost. But with the name change and the addition of "Alien" in the title, it seemed like that statement by Scott was actually untrue.

However, it now looks like Scott wasn't exactly lying. A set pic has been leaked online, revealing the new design of the Xenomorphs in Covenant, but they are actually going to be referred to as "Neomorphs". So Scott didn't lie saying there weren't any Xenomorphs, he just didn't elaborate that they have a new name. Sneaky little bastard! You can see the set pic for yourself below:

I like the design. It just shows that over the course of these prequel Prometheus films, we're going to be seeing the evolution of the Xenomorph. We're seeing them transform from a vial of black goo in Prometheus to the full fledged, sh*t-your-pants version we see in the original film. I just hope that we see some larger Neomorphs in the film than the ones on display. Sure, give us a couple smaller ones in the beginning, but if you don't have a full-sized Neomorph wrecking havoc by at least the third act, then we're not really progressing anywhere. Alien: Covenant needs to work to answer more questions than it asks this time around, because that was most people's problem with Prometheus. It added to the confusion rather than helping sort through it. It's fine for Covenant to add more mystery, but don't just pile on more and more questions, because then you're going to lose people. Give us some answers and give us some badass Neomorph action, and we'll be back on track with this franchise!

What do you think? Do you like the design of the Neomorph? Do you like the idea of these movies slowly evolving the Xenomorph into what we see it as in Alien? Are you looking forward to seeing Alien: Covenant? Leave your thoughts in the comments section below.