Overall, I rather liked the last Assassin's Creed trailer. It gave us some insight into this world, as well as the style of action we would be getting. The scenery itself looked right out of the video game, which, as a fan of the series, was nice to see. But I hated the song. Not only did it not fit with the context of the film at all, but it was just jarring. I really do hate this trend trailers have now where every single trailer has to have an auto-tuned pop song. Whatever happened to just having a score in the background? I'm just getting sick of it. But anyways, the song was really my only problem with the last trailer. However, I've been anxious to see a new trailer before the film's Christmas release. This could potentially be the first critically and financially successful video game movie adaptation, and I for one am really rooting for it. And now we have our second trailer for Assassin's Creed.

I liked this one more than the previous one! Not only is the song choice better (still not ideal, but an improvement), but it's visually an upgrade from the last trailer. The CGI looks better rendered, and we get an even better look at the world of the Spanish Inquisition. It looks stunning. And the action looks incredible. It's right out of the video game. I was honestly surprised by how well they adapted the fighting choreography when I was watching this action unfold. That is a huge selling point for fans, and I think that level of close adaptation will go a long ways for the audience. I obviously still have stipulations because it is a video game movie adaptation, and like I said before, none of them have actually been any good. Everyone thought that trend would end earlier this year with Duncan Jones' Warcraft, but that turned out to be a major disappointment. So I'm hesitant to confidently say that this will be really good, but after seeing this trailer, I have a lot more faith in it than I previously did before. 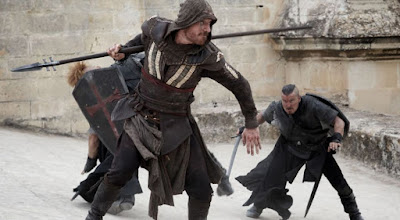