Director Peter Berg and Mark Wahlberg just came out with a film this past weekend, in Deepwater Horizon (read our review here). I walked away thinking Berg had filmed the movie in the best possible way-- capturing it almost like a documentary. He was there just to witness the event, not to stylize or enhance it in any way. And I walked out of the movie thinking about how interested I was in seeing that style applied to Patriots Day. The Boston Marathon bombing is especially close to me, since I'm a Boston native. It's a very emotional subject for many Bostonians, and at first, I was nervous to hear there was a film coming out about it, just three years after the event. But after seeing how respectfully Berg handled the tragedy of the BP oil spill with Deepwater Horizon, I became very hopeful that he could pull off Patriots Day. And with perfect timing to the release of Deepwater Horizon, the first trailer for Patriots Day has been released.

I really liked this trailer. I got the immediate sense that I got with Deepwater Horizon: respect. Peter Berg is going to honor everyone who was injured or died from this, and give us a powerful film about the strength of unity. Wahlberg is also from Boston, so I think that adds a lot to this film's validity. The supporting cast also jumped out at me. J.K. Simmons, Michelle Monaghan, Kevin Bacon, John Goodman, Melissa Benoist... these are all fantastic actors. But Simmons' role really got me excited. He is an example of the perfect supporting actor. He never outshines the lead, nor does he over-steps his bounds as a supporting actor, but you always walk away thinking he was one of the best parts of the film. So I am especially excited to see him in this. With its December release date, I think Patriots Day has a real shot at being even better than Deepwater Horizon, and could be an Oscar contender. But we'll have to wait and see for that. 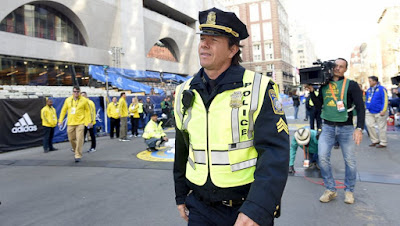 What do you think? Did you like the trailer for Patriots Day? Are you looking forward to seeing the film? Leave your thoughts in the comments section below.