In Preparation For: Bad Santa 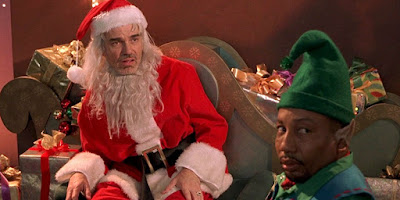 With Bad Santa 2 coming out this weekend, I thought I would review the original 2003 film. I hadn't seen it prior to the trailers coming out for the sequel. So I went out and found the original to catch up before I saw the sequel. I didn't really have expectations for for it. I just wanted to laugh. I wasn't expecting it to be one of the all time great comedies. I was just hoping for a half-decent movie to give me a reason to want to see the sequel, because I really liked the trailers I had seen up until then. So I watched the movie, and I liked it. Bad Santa is not a great movie, nor a great comedy, but it delivers on some good laughs and is entertaining enough. Keep in mind, this review will have spoilers, so make sure you have watched the film before you read this review.

Willie (Billy Bob Thornton) is a drunkard conman working with his associate Marcus (Tony Cox) who pose as Santa and his Little Helper in order to rob malls after hours. But when Willie meets a girl (Lauren Graham) and a kid (Brett Kelly), Willie begins to change a little as a person. 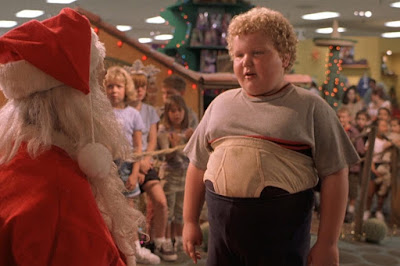 I think the biggest part of this movie was seeing Billy Bob Thornton, who is such an esteemed and serious actor, being so ridiculous. It's kind of the same feeling I had seeing Jeff Daniels in Dumb and Dumber, after having seen him in The Newsroom. I thought Thornton was great in this movie, and really delivered with the comedy. He's good at playing this really pathetic person, who is constantly drinking and doesn't give a f*ck what anyone thinks about him. But I think Tony Cox and Brett Kelly stole the movie. The two of them had very different kinds of comedy, but I thought they were the funniest parts of the movie. They both gave the best lines and had the funniest moments. Kelly especially cracked me up whenever he came on screen. The three of them comedically made the movie, and I really liked all their interpersonal dynamics. The film also walks the line of absurdity throughout the entire movie. There are things happening that are so wacky and so outrageous, but they are grounded just enough for you to accept them.

However, Bad Santa isn't as consistently funny as I had wanted it to be. It has great moments of comedy, and some hilarious scenes and lines. But the comedy isn't fluid throughout the entirety of the movie. It's patchy and sparse, and that was bothersome. A comedy needs to have comedy throughout the entire movie, because the characters or the narrative wasn't compelling enough for the comedy to dissipate like that. I also didn't like Lauren Graham's character. She did a fine job acting, but the character was really only there as a sex object for Willie, and the movie made no attempts to further develop her. I don't mind love interests in films, as long as they are their own, independent and competent characters. But Graham served no purpose in this movie other than to be the girl Willie hooks up with throughout the movie, and that was a problem. 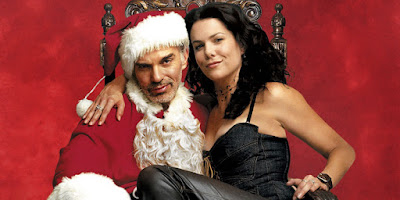 Overall, Bad Santa isn't the greatest comedy in the world, but it's got some good laughs and fun scenes. Billy Bob Thornton is great in the role, but Tony Cox and Brett Kelly steal the movie. They have the funniest lines and the best moments. The movie continuously walks the line of absurdity, just barely grounding some of the things that happen. It was a narrow tightrope, but I think the movie walked it well enough to not turn me off from it. However, the movie is not as consistently funny as I would've wanted it to be. The scenes of comedy are spaced out, when it should've been a lot more fluid. Lauren Graham's character also served no purpose other than to be a sex object, and she had no development whatsoever. It was really beginning to bother me as I was watching this movie that the film was making no attempts whatsoever to make her anything more than just being Willie's girl. In the end, Bad Santa is a decent enough comedy, and is worth a watch. Hopefully the sequel is on the same level, or maybe even better.

What do you think? Have you seen Bad Santa? Are you looking forward to the sequel? Leave your thoughts in the comments section below.