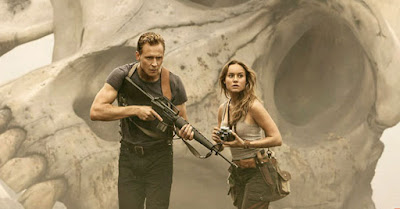 Back during San Diego Comic Con this summer, we were surprised with a trailer for Kong: Skull Island, which is due out in March of next year. The trailer was actually really good. It didn't focus on big budgeted special effects or large action set pieces. Instead, it focused on the human characters of this story, especially the dichotomy between Samuel L. Jackson and John Goodman. The trailer very much adopted a horror feel, as opposed to the action/adventure tale we were all kind of expecting. It was a refreshing trailer, and it made me really excited to see this film. While Godzilla was enjoyable to watch, it wasn't a great movie by any means. And when they announced that King Kong and Godzilla we going to be in the same universe, I really needed to buy into this new version of King Kong. The trailer did sell me. But there was one noticeable absence from the trailer... Kong himself. I understood why they didn't put him in, and I didn't necessarily want to see him quite yet. But Kong is the selling point of the movie, and you need to show him at some point if you expect people to come see the movie.

An image from the upcoming issue of Entertainment Weekly has dropped online, which gives us our first look at King Kong, whose performance capture work is done by Toby Kebbell. You can see the image for yourself below: 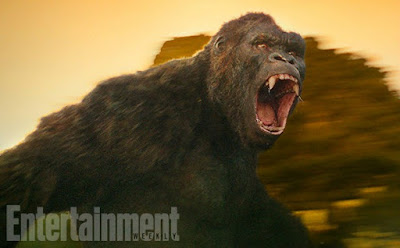 The more I look at it, the more I love it. It's clearly King Kong. It doesn't look like just some random CGI ape; it's clearly Kong. But at the same time, it's different from what we got with Peter Jackson's incarnation. That Kong was much older and far more wise, whereas this looks like a much younger Kong, which would make sense with the timeline. This film takes place in the 1970's, whereas Godzilla was set in modern day. So by the time the two square off in 2020, Kong will have aged about 50 years. But even if he does look younger, he doesn't look any less ferocious. My guess is that we'll get a much more erratic and volatile Kong with this movie, and then we'll see him become a lot more seasoned and weathered by the time we get to Godzilla vs. King Kong. It would make sense, in terms of giving Kong a story arc. I think this image looks great, and I've very excited to see what they do with Skull Island. I have a feeling it's going to please fans that are upset that they're rebooting Kong, and it will bring in new fans with its additions and changes to the classic mythology. I think we're in store for something quite special and unique.

What do you think? Do you like the new look for King Kong? Are you looking forward to seeing Kong: Skull Island? Leave your thoughts in the comments section below.