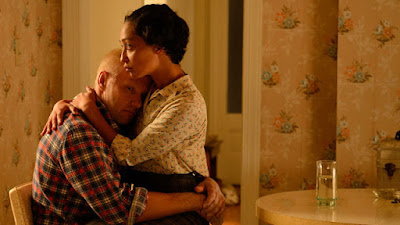 I was really excited to see Loving. Not only was it getting fantastic reviews from the critics (it currently stands at 90% on Rotten Tomatoes), but it was an important story. It depicts an interracial couple going all the way up to the Supreme Court to fight for their right to be married. Especially in today's atmosphere, this is a story that needs to be told, and I was very interested in learning more about the Lovings. Joel Edgerton is a fantastic actor. He was great last year in The Gift, not just in his supporting role, but in directing as well. I wasn't as familiar with Ruth Negga's work, but I was nonetheless excited for this movie. It had great talent behind it, it was telling an important and powerful story, and it was getting outstanding reviews. All of that combined had me going in expecting to see a major Oscar contender. I was expecting to walk out thinking that Edgerton and Negga were both locks for nominations, as well as expecting award nominations for writer/director Jeff Nichols, and for Best Picture. But instead, I walked out pretty disappointed. Loving tells a very important and timely story, although the movie itself doesn't live up to the level of what the film should have been.

Richard Loving (Edgerton) and Mildred Jeter live in Virginia and travel to Washington, D.C. in order to be married. However, when they return to Virginia, the police inform them that their marriage will not recognized, and that they are breaking the law. With the help of their lawyer, Bernie Cohen (Nick Kroll), the Lovings take their case all the way up to the Supreme Court in order to change the Constitution to recognize interracial marriage as being just as important as any other kind of marriage. 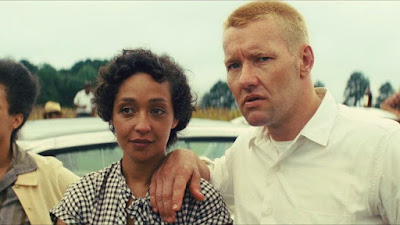 Like I said before, this is an important story that needs to be told. People forget just how deep racism is embedded in our culture, and a story like this is just further proof of its heinous existence. This is really where Loving hits its marks the best. You do feel the sting and punch to the gut when people, both black and white, stare at Richard and Mildred differently when they're in public. When the police make outlandish excuses as to why they have to detain them, when you know it's just because of their biases. When even the courts fail to be fair and equal, when the word "equality" is literally printed on the courthouse. Loving isn't as overwhelming with its civil rights message as other movies can be, but it is certainly present, and it's probably the best aspect of this film. It's what this movie does the best. If for nothing else, I think people should see Loving in order to broaden their horizons about our society.

Unfortunately, I think the movie itself just doesn't work and isn't overly interesting. I can appreciate a slow movie, as long as it builds to something worthwhile. With Loving, it's slow and there's no overarching momentum. There's no fluidity. It just inches along through a collection of scenes. And these scenes end up being incredibly repetitive. Not only do we see the characters doing a lot of the same things they were doing before, but a lot of information is repeated over and over. Scenes happen that give us no new information, or repeat what we learned from an earlier scene. It's not just that some scenes needed to be cut, the entire film needed to be restructured. As it stands right now, there's no connective tissue making this a cohesive film. It's just scene after scene. And yes, there is an endgame, but it's glossed over and trivialized in the scheme of the entirety of the movie. There was just nothing captivating about this movie, nothing really reeling me in. 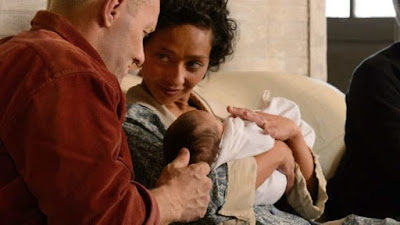 The performances are also underwhelming. I said before that I went in expecting Oscar-caliber performances, but instead what we got was mediocrity. Ruth Negga was fine. She wasn't bad, but she didn't stand out in any way. Joel Edgerton's character was very one-note. He didn't express any emotion. He didn't have any depth. And that's how Edgerton played him, so I can't really blame him for that. Edgerton has one face that he does throughout the entire film, and he just stands around not doing anything. Look, I think Edgerton is a fantastic actor, but he just didn't do much with his character in this one, because there wasn't much there to begin with. It's probably more of a fault with the writing and the direction for the character. Nick Kroll had a supporting role, and he was surprisingly good. He wasn't outstanding, but considering what Kroll has done before in movies, this was distinctly dramatic. It wasn't anything to write home about, but it showed Kroll has potential to be more than just a comedic actor. And Michael Shannon had a very brief cameo. He was good, but he didn't do anything. He just shows up for a couple minutes for the sake of showing up.

Overall, Loving is a disappointment. It's an important story about racism and discrimination that needs to be told, but this film is not the best venue for it. Structurally, this movie has no fluidity. There's no connective tissue; it's just a collection of scenes. As a result, these scenes end up being rather repetitive. It's slow and it's boring, to be blunt. There's nothing compelling about the film itself that locks you in. It just kind of drags along. The performances are also underwhelming. While Negga was good, she didn't leap off of the screen in any way. And Edgerton was incredibly flat and one-dimensional, but that was his character. There's no depth of emotion to his character. Nick Kroll shows a new side of him that hints that he could do more dramatic roles, but it's nothing outstanding. And Michael Shannon has a very brief cameo that doesn't do more than just to say "Hey look! It's Michael Shannon!" In the end, Loving is a film that to the quality that the story deserves, and the striking story gets muddled in the dreariness of the film. I would like it be remade in about ten years, and done right. 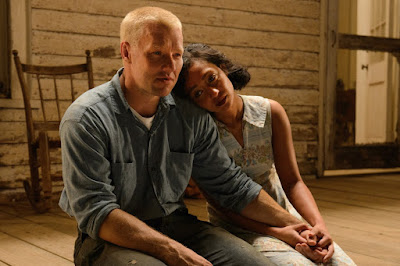 What do you think? Have you seen Loving? Did you like the film? Leave your (spoiler-free) thoughts in the comments section below.