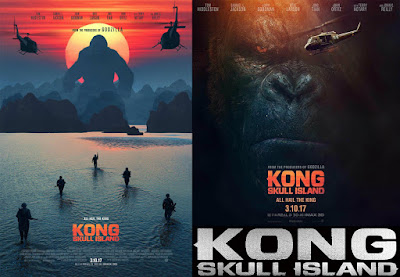 The second trailer for Kong: Skull Island just dropped the other day (you can see it here), and along with it came two new posters. I really like the posters. They align themselves more with the horror feel of the first trailer, and I like that. The first one is a lot more retro, which fits into the film's 70's setting. That's one that I could possibly hang up on my wall. But I also really like the second one. Overall, these posters don't do much in changing my excitement for the film, but they're effective in getting the word out about this movie. You realize it's a monster movie. You know it's King Kong. A lot of things are apparent from these posters, and really, that's what you need them to do. Not everyone knows that a new King Kong movie is coming out, but if you hang a couple of these in the movie theater to coincide with showing the trailer in theaters, you now have people's attention. I don't know if I would necessarily buy these to hang up, but they're interesting and fun to look at online and, like I said, it works to bring people's attention to this movie. 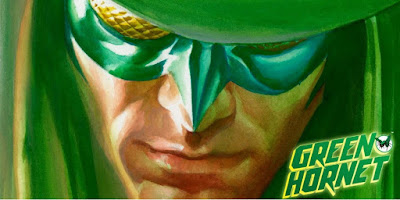 It has been confirmed that The Accountant director Gavin O'Connor will be helming a reboot of The Green Hornet, which had been previously adapted by Seth Rogen and Evan Goldberg. I never saw their version of The Green Hornet, but I did see The Accountant, which you can read our review for here. What O'Connor did with that movie blew me away, in terms of his slow but steady storytelling and the dark and gritty action. I don't know really anything about The Green Hornet property. I'm very well-versed in comic books, but that's one that I'm not familiar with at all. But if O'Connor can bring to The Green Hornet what he brought to The Accountant, then I'm all in. The Accountant very much felt like a comic book movie in of itself, but more so along the lines of a graphic novel like Watchmen or V for Vendetta. My continued interest in this property will depend upon who they cast and what direction they take the film, but based upon the addition of O'Connor alone, I'm on board. 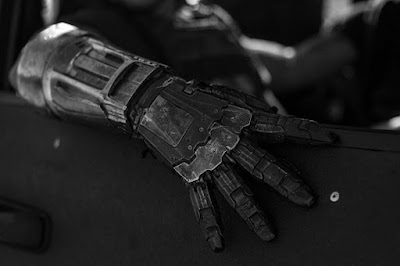 Since the debut of the Logan trailer a few weeks ago (you can see it here), Fox has been putting out a series of random stills from the film, usually in black and white. However, one of their more recent images, pictured above, is of a seemingly robotic arm. At first, it's easy to dismiss this picture as just some random, insignificant part of the film, but the more I looked at it, the more I wondered: could this be our first look at Mister Sinister? He's already been confirmed to be in the movie, and we got a tease of the character in the post credits scene for X-Men: Apocalypse. This could be anyone. It could be just some random Reaver from the film. But considering that Mister Sinister has yet to be teased, and that this looks like it could be part of his design, I'm not ruling it out. I understand that I'm probably reading way too much into it, but it's a possibility we can't rule out. I guess we'll find out sooner or later whether this image is actually related to Mister Sinister, when we get our "first" look at the character in a subsequent trailer or other kind of promotional material. We'll have to wait and see.


So that's our Nerd Round-Up for this week. What do you think? What are your thoughts on the news articles? What about the videos? Leave your thoughts in the comments section below.