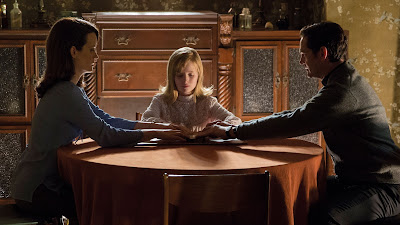 Back when I was more conservative with the new releases that I saw, I happily skipped Ouija. I heard the most awful things about it, and I had no interest in wasting ten bucks on a piece of sh*t that I could go to any public bathroom to see for free. And when I heard that a sequel was somehow in development, I couldn't care less. I had no interest in the film whatsoever, and I certainly never thought I would actually go see it. Then the trailer came out, and it wasn't half-bad. Some of the scares got me, and it looked like they were going in an entirely different direction. Still, I didn't think I was going to go see it. But a couple of things happened in between then and now. First of all, we got a streak of great horror films with The Conjuring 2, Lights Out and Don't Breathe. For a person who is not the biggest horror movie fan, I really liked these films, and I became a lot more open-minded about the genre. Secondly, the reviews for Ouija: Origin of Evil were great, and they praised the film. So with all of this in mind, I did the unthinkable and bought a ticket to see this movie. Ouija: Origin of Evil had incredible promise with its first two acts, but a bloated and unnecessary third act sinks what could have been a fantastic movie to just a pretty good movie.

After recently losing her husband in a car crash, Alice (Elizabeth Reaser) struggles to raise her two girls Lina (Annalise Basso) and Doris (Lulu Wilson), while also running a fortune telling scam. But when Alice buys an Ouija board, strange things begin to happen in the house that point to the family being able to connect with the spirit of their fallen father... or so it seems. 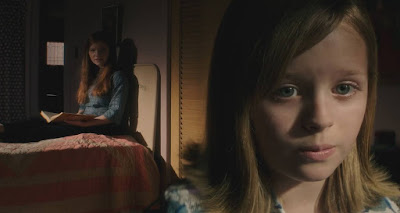 Ouija: Origin of Evil's biggest strength was its performances. I usually give horror movies sh*t for bad actors, but this one knocked it out of the park. Reaser was brilliant as a single mother just trying to survive. She doesn't know exactly what the best things for her kids are, and she feels just emotionally weighed down. You sympathize with her throughout the whole movie, and a lot of that humanity present was due to Reaser's performance. Basso and Wilson were also excellent in their roles as the children. The character of Doris is the one given much more to do compared to the other characters, as she is the one who becomes possessed (evident in the trailers), and I thought Wilson was fantastic. She was definitely channeling The Exorcist at certain parts. Sometimes it work as well as other times, but overall, for such a young kid, I thought she was remarkable. Basso was also great, because she walked a thin line. Her character had the most potential out of anyone to become the annoying one, yet Basso gave a multi-layered performance that really helped even out the dynamics between the three main characters.

One thing that stood out to me from the get-go was the freshness of this film's premise. I loved the idea of these people who were essentially scamming others by pretending to be able to talk to the dead are now suddenly actually being able to do it. It was original in the genre of horror, and I completely bought into it. I also appreciated Origin of Evil's incredibly slow burn. The Ouija board doesn't even come into play for like twenty or thirty minutes. The film takes its time to introduce us to its characters and let us live with them for some time. This allows us to become emotionally attached to them, so that when the creepy sh*t starts to go down later, there's slightly more of a punch to it. And even when we start to get the little flares of horror, they're just that: little. Slight, tiny things that happen to create simply a sense of unrest, but it never spirals out of control (at least until the third act). The restraint with this film is something absolutely to praise. Origin of Evil also went out of its way to make this movie feel like a product of the 1960's. From using the old Universal logo, to the art direction and set design, to the vintage tint of the film, they really worked to pull you into this world and make this feel like a period piece. A lot of things they did were subtle and probably went unnoticed, but the fact that they did them anyways shows the deliberate care put into this movie, and that was something that I, for one, greatly appreciated. 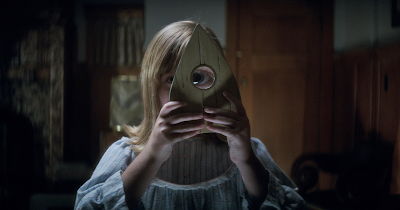 I was ready to say that Origin of Evil was my favorite horror movie of the year, until we got to the third act. Remember how I said that the film was slow and deliberate and restrained from giving you too much? Yeah, that all goes out the window. In its third act, Origin of Evil spirals into a cliched horror movie with all the classic faults. It lost its ingenuity and instead traded it in for blandness that we've seen a hundred times over. The subtlety of the first two acts is what made it frightening, and as soon as they pulled back the curtain and threw everything at you, it suddenly wasn't so scary anymore. I began rolling my eyes and sighing in the theater as this film devolved into what I detest most about the modern horror genre. The characters made illogical decisions. They ran back and forth and all over the house, everywhere. Jump scares galore. Things would happen just for shock, but didn't actually mean anything or make any kind of sense. They threw the kitchen's sink at you with this third act. And that's what made this film go from being fantastic to pretty good, because not only was the third act a complete disappointment, but I walked out of the theater not nearly as satisfied as I should have been.

Overall, Ouija: Origin of Evil does a lot of things right and some big things wrong. It has a unique and fresh premise that was captivating from the start. It's performances all around were incredible, and really worked to lock in the audience. The first two acts are a very slow burn, holding back and restraining from giving you too much. It creates a frightening atmosphere that had me on the edge of my seat. The direction by Mike Flanagan is also incredible. However, Origin of Evil then throws that all out the window with its third act by giving us a bland, tired third act that we've seen far too many times. It honestly felt like the studio brought someone else in to direct the third act, because it was aesthetically so radically different from what Flanagan built with the previous two acts. Also, a lot of big moments in the movie were spoiled in the trailer. There are a lot of things that I had seen in the trailers that I would have wanted to see for the first time in the theater, and that was pretty annoying. In the end, Origin of Evil is a perfect example of what to do and what not to do with horror movies. I appreciated the first two acts so much that it was sad to see what the third act became. Before that third act, I would have given this a much, much higher rating. Mid-4s, probably. But now I have to drop it lower than I would have wanted to. 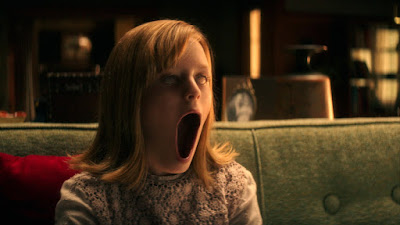 What do you think? Have you seen Ouija: Origin of Evil? Did you like the film? Leave your (spoiler-free) thoughts in the comments section below.