The Edge of Seventeen SPOILER-FREE Review 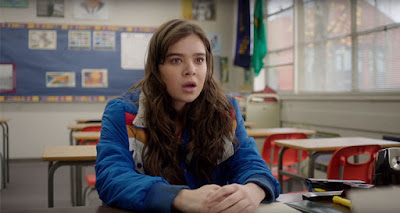 The Edge of Seventeen is a movie that I had no plans nor intentions to see. The trailers never really caught my interest. It honestly looked like a mediocre chick flick, and I love movies, but I don't love them that much. All jokes aside, I couldn't have cared less about this movie, and then reviews began to pour in. Everyone had gone in thinking the exact same thing as me, but they were absolutely blown away by the film. They were saying it was relatable, it was funny, and it was well worth your time. So that, plus the 95% on Rotten Tomatoes, got my lazy ass up and out to go see this movie, and I am so glad I did. The Edge of Seventeen is a wonderful film that doesn't hold back in its honest and real depiction of high school and teenagers, front-lined by fantastic performances, steady direction and brilliant writing.

Nadine (Hailee Steinfeld) is an awkward teenager just trying to survive high school. Her best (and only) friend Krista (Haley Lu Richardson) is dating her brother (Blake Jenner), and it has really set her over the edge. As Nadine tries to just push forward, she questions a lot of things, and feels entirely alone. (But keep in mind, it's a comedy!) 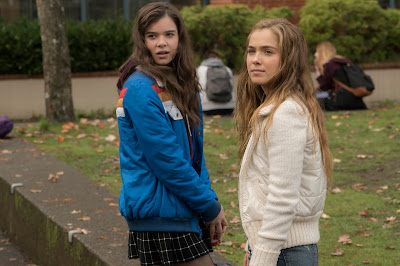 The Edge of Seventeen feels like a modern John Hughes film. It has that same kind of coming-of-age feel, along with the quick and intelligent humor. But it's definitely tailored to today's audiences. Not in the sense that it's littered with pop culture references (Nadine spends an entire scene condemning that part of Millennials), but that it's not a glossy, watered-down version of what high school is like. This film shows you the grit and grime of your high school years. The language, the attitudes, the mindsets-- it's all there. And even if your not a girl, you can relate to this film and the character of Nadine because her issues and her problems go beyond her gender. The sh*t she goes through in this movie is universal, and that's what really caught my attention about this film. I was sitting there thinking "Yep, I've done that", "I've definitely thought that before", "Holy sh*t, this is pretty much me on screen". And I think a lot of people are going to relate to this movie. It's geniusly crafted to be so accessible to everyone, and it's probably one of the best aspects of the film.

The other great aspect of this movie is the performances. Hailee Steinfeld leads the film, and she's incredible. I had completely forgotten until after I got out of the theater that she had been nominated for an Oscar for True Grit. She had great comedic timing and she perfectly encapsulated the complexity of the character. She's snarky, but funny. She's lovable, but can be a bitch (she says it herself). Steinfeld navigated this excellently. She had caught my eye when I saw her in Begin Again, and with this film she just reaffirmed that she's one of the most talented young actresses out there now. The supporting cast is really good too. Haley Lu Richardson, Blake Jenner, Hayden Szeto and Kyra Sedgwick were all great. But Woody Harrelson stole every scene he was in. He plays this kind of dickish teacher who doesn't hold back and speaks his mind. For most of the film, you think he's just a charming asshole, but by the end of the movie they reveal something about him that makes him a much more dynamic character, and it made his presence in the film all the more endearing. 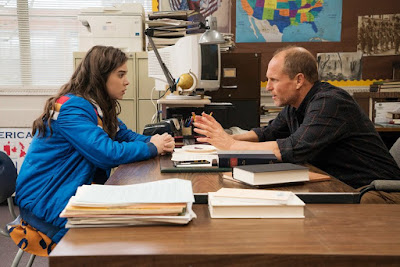 I didn't have very many negatives. I thought that the character of the brother, Darian, was kind of weak. He's very one-note, and they try to give him more layers as the film progresses, but it doesn't really work. He remains a one-note character, and that was kind of disappointing considering just how layered and complex Nadine was. They also don't go a lot into the details on why Krista and Darian get together. They allude to it a couple times, but there's no substantial reason. For something that messes with Nadine's mind so much, and is so integral to the film, we kind of needed a more concrete answer, but it never really comes up. I also wish there were more scenes with Woody Harrelson. It's just because I loved his character so much in this movie that I wanted to see more of him. But that's just a small nit-pick. I just wanted more of a good thing.

Overall, The Edge of Seventeen is a funny and real depiction of people's teenage years. It captures the mood and atmosphere of high school perfectly. It feels very much like a modern John Hughes film. The direction by Kelly Fremon Craig was fantastic, and this was her directorial debut. I'm definitely keeping my eyes on her. She also wrote the screenplay, which I thought was equally as impressive. Hailee Steinfeld was brilliant in her role, excellently capturing the nuance and complexity of her character. She handled the comedy with grace, as well as the drama. The supporting cast was also really good, but Woody Harrelson stole it. He was awesome in this movie. The script for the film was really well written, and I was very impressed with its quick wit and intelligence. However, I thought Darian was kind of a one-note character, and they don't really get into why Krista and Darian get into a relationship. But, in the end, The Edge of Seventeen proves to be a surprisingly entertaining movie, and one that everyone watching can relate to in some capacity. 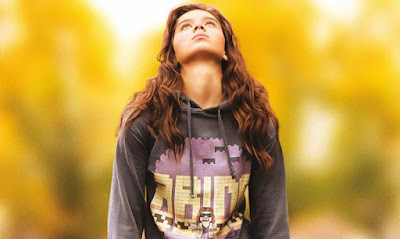 What do you think? Have you seen The Edge of Seventeen? Did you like the film? Leave your (spoiler-free) thoughts in the comments section below.