Why Him?- REDBAND Trailer 2

Why Him? is a movie I've had faith in for a while now. While the first trailer didn't necessarily blow me away, I bought into the concept, and I bought into the talent behind it. Everyone loves Bryan Cranston from his roles in serious projects like Breaking Bad and Trumbo, but a lot of people forget he started out with comedy, having several reoccurring roles in shows like Seinfeld, The King of Queens, and of course Malcolm in the Middle. So after his (brilliant) foray into drama, it's nice to see him return to his roots a bit. And of course, there's James Franco. The guy is a comedic genius, and although he seems to play the same kind of character in every comedy, he's just so good at it. Plus, this is directed by John Hamburg, who wrote the screenplays for the original Zoolander and Meet the Parents, which are both fantastic movies in my mind. He also wrote and directed I Love You, Man, which is a movie I absolutely love (no pun intended). So when I saw that a second redband trailer for Why Him? had dropped, I was excited. I wanted to see more from this film to buy into more than just the cast and premise. So I watched it with high expectations.

Unfortunately, they reuse a lot of material from the first trailer, so that was kind of disappointing. But at the same time, I wouldn't want them to spoil any of the really good jokes, so I guess it's a good thing that they're not showing us much new footage. The new footage that I saw in this trailer got some laughs out of me. I didn't fall out of my chair with laughter, but they got a few good chuckles out of me. One thing I was looking for was a little bit more from Keegan-Michael Key's character, who only got a quick glimpse at in the first trailer. But with this trailer we only got a replay of that same clip. Either he has a lot of great scenes that they don't want to spoil, or he's barely in the movie. I'm really hoping it's the former, because I love Key, and I always want to see more of him, but it's probably the latter. While this wasn't the greatest trailer in the world, nor was it everything I wanted from the second Why Him? trailer, I'm still incredibly optimistic about this movie. Like I said, it's the talent and premise. This film could very well suck, and I know that is more than just a possibility, but there's some sort of stubbornness in me that's saying that this could end up being a fun, throwaway Christmas comedy that has everyone walking out of the theater smiling. 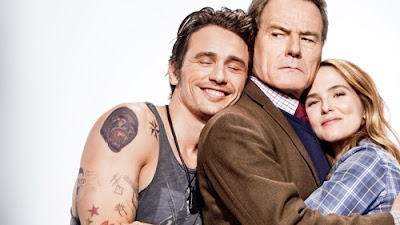 What do you think? Did you like the redband trailer for Why Him? Are you looking forward to seeing the film? Leave your thoughts in the comments section below.