Dunkirk is one of my most anticipated films of 2017, simply because it is directed by Christopher Nolan. He is one of my favorite directors working today, and I would say that almost all of his movies are masterpieces. The Dark Knight, Inception, Memento, The Prestige (just to name a few) are beyond spectacular, and prove this man to be an incredibly adept director. His sense of visuals paired with impeccable stories make for truly compelling cinema. But a criticism of Nolan can be that he hasn't done a lot in terms of variety. He has really corned the market in the realm of science fiction, but hasn't done much to venture far outside of that. However, with Dunkirk, Nolan is really going out of his wheelhouse by giving us a straight up war movie. Dunkirk is so radically different from anything Nolan has done before that it really gives fans something to look forward to. We already know that Nolan is a talented director, but in order for him to cement his name as one of the all-time greats, he has to be able to do more than just one genre of film. So far, all we've gotten from the movie was a brief teaser trailer, so I've been looking forward to seeing a full length trailer in order to get a broader perspective on the film. And now we have the new trailer.

The scope of this film is incredible. The trailer is packed to the brim with beautiful cinematography, done by Hoyte Van Hoytema, Nolan's DP on Interstellar. The shots are perfectly orchestrated and composed. From this trailer alone, this may be one of Nolan's most beautiful looking films to date. The score by Hans Zimmer is striking and powerful, and really sets the stage for the trailer. Zimmer's scores for Nolan's films have each been unique and compelling, and from the small glimpse we had with this trailer, I have no doubts we will get another masterful score. The action sequences look phenomenal. I was on the edge of my seat watching some of these war shots, especially with the planes circling around the ship. This really looks to be Nolan's Saving Private Ryan, and I can't wait to see these elaborate war sequences play out. In terms of the story, we don't get lot in this trailer. I would have liked to have known a little bit more about what we're getting into, but holding back the story is better than the trailer spoiling the whole movie plot point for plot point. I can already tell this is going to be a visual marvel, and I'm hopeful that the story can match it. Even with his lesser films, Nolan has delivered on intricate stories and fleshed out characters, so I'm hopeful he'll do the same with Dunkirk. 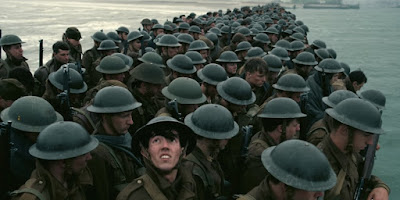 What do you think? Did you like the second trailer for Dunkirk? Are you looking forward to seeing the film? Leave your thoughts in the comments section below.