I've said it before and I'll say it again: Dwayne Johnson is one of the hardest working people in Hollywood today. He puts everything he has into every single project he works on, and he's constantly working. He was fantastic in Moana, which you can read our review for here. So whenever Johnson is attached to a project, it instantly attracts my interest. Zac Efron has also been making the rounds in comedy. After films like Neighbors and Dirty Grandpa, he's definitely found his stride in his post-High School Musical career. So combine the two, and you've definitely got my attention. To be honest, I don't know much about the Baywatch TV show. The extent of my knowledge is from Friends. But with Johnson and Efron, and throw in Alexandra Daddario who isn't the worst actress in the world and Seth Gordon, who directed Horrible Bosses, then I think we may be in for something special with this movie reboot.

The first trailer for Baywatch has dropped, and I'm kind of mixed on it. I didn't think the jokes were that funny. I like the style they're going for. It's fun and lighthearted, and poking fun at itself. That I appreciate. I also really liked the chemistry between Efron and Johnson. I thought their dynamic was really strong, and that's something I want to see more of in the film. But like I said, the comedy kind of fell flat for me. Except for the last joke, which had me cracking up laughing, literally laughing out loud. That was a great one, but everything else just got a smirk from me, not even a chuckle. Now look, this is an R-rated comedy, and Johnson has said it's going to be incredibly raunchy. So I'm holding out for the redband trailer. I think that will be the most clear indication of whether this movie will be funny or not. So, I'm mixed on this trailer but I'm holding out hope. 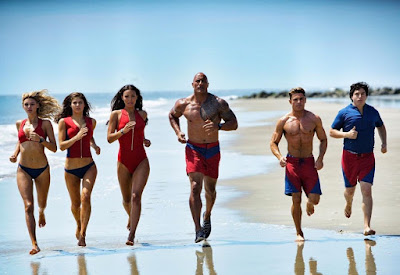 What do you think? Did you like the first trailer for Baywatch? Are you looking forward to seeing the film? Leave your thoughts in the comments section below.