I know that Blade Runner is revered as one of the all time great science fiction classics, but I'm not a big fan of it. When I saw it, at least, I wasn't as nearly struck as others by its ingenuity and creativity. I'm certainly a bigger fan of Ridley Scott's other science fiction films, such as Alien and The Martian. But I have been known to change my opinion on a film upon subsequent viewings, so I will definitely re-watch Blade Runner before the sequel hits theaters next summer. There's certainly a lot to be interested in with Blade Runner 2049. It sees the return of Harrison Ford, which we know from Star Wars Episode VII: The Force Awakens that he's still got it. It also sees Ryan Gosling take over as the lead, which is a compelling move. Gosling is a fantastic actor, and is especially getting multitudes of acclaim for his performance in La La Land this year. Denis Villeneuve is taking over the director's chair, and while I didn't love Arrival as much as everyone else did, there's no denying that he did a great job directing it. In my opinion, he did an even better job with 2013's Prisoners. So all the pieces are in place for a captivating science fiction film to be made, and one that I will definitely give a chance. Now, we have our first trailer for Blade Runner 2049.

I have to say, I really liked this trailer. Granted, it's a teaser trailer and it's incredibly brief. But from what we see in this trailer, my expectations went from being very moderate to relatively high. The cinematography is gorgeous. The use of colors and figure placement makes for compelling imagery that certainly caught my attention. The score is haunting and very fitting for this kind of dark, science fiction story. We don't see too much of the world of this film, but instead the trailer focuses more on Gosling's character, which was a bold but encouraging choice. It shows that this movie may be going for a far more human and character-based film, rather than just throwing flashy imagery and impressive CGI at us. We then see the return of Harrison Ford, which doesn't have as much of an effect as his "Chewie, we're home" line in The Force Awakens trailer, but it definitely has an impact here. Look, this movie is coming out thirty five years after the original. We've seen countless examples of movies coming out twenty-plus years after their original and failing; Dumb and Dumber To, Independence Day: Resurgence, Zoolander 2 just to name a few. But we've also seen it work, like with The Force Awakens. I may not have been a big fan of Blade Runner, but I trust the talent behind this sequel and I liked the teaser trailer, so I'm now cautiously optimistic for Blade Runner 2049. 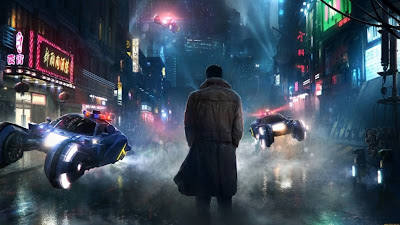 What do you think? Did you like the first trailer for Blade Runner 2049? Are you looking forward to seeing the film? Leave your thoughts in the comments section below.