Spider-Man has been my favorite superhero ever since I was a little kid. It was the first comic book I ever got into, and he has since really defined my childhood and adulthood. Needless to say, he's very important to me, and so I want his movies to be good. I think the Tobey Maguire Spider-Man trilogy gave us the best Peter Parker, while the Andrew Garfield The Amazing Spider-Man films gave us the best Spider-Man. But the small taste of Tom Holland as the Webslinger in Captain America: Civil War proved that he may top both of those. From what we saw in that movie, it seemed like they had really nailed the character. Peter was an awkward teen, which is what he's supposed to be, and that's something we haven't really gotten yet in the movies, mainly because they've been casting thirty year olds as the character. We also got a Spider-Man who jokes, which is what was really missing from the Tobey Maguire Spider-Man. We got a little bit of it in The Amazing Spider-Man, but not as much as we should have gotten. During the Airport fight in Civil War, we saw a very true representation of what Spider-Man is. So with Holland's first solo film, Spider-Man: Homecoming, hitting theaters next summer, I've been excited to see a trailer, and now we have one.

I really liked a lot of elements in this trailer. I'm not going to say that I think the trailer itself was really good, but I'll get into that later. The opening scene with Spider-Man taking down the bank robbers was right out of a Stan Lee and Steve Ditko comic. It was excellent. We then see shots of him in high school, and it is very reminiscent of a John Hughes movie, which is what they were going for. We also get a lot of scenes with Robert Downey Jr. as Tony Stark, which I thought were great. I'm sure they're featuring him this heavily as a marketing tool, because I don't think he's going to have as large of a presence in the film as this trailer is leading on. But the comedy was great and they continue the interesting dynamic between Tony and Peter that we saw in Civil War. Then we get Michael Keaton as the Vulture. I wasn't a fan of the concept art design that we saw of the Vulture, but seeing him now in action, I've changed my mind. He looks terrifying and fantastic! I'm hopeful that Marvel can give us a really solid villain with this movie. Like I said before, I don't think this was the best trailer. Aesthetically, it's kind of messy. It's just a bunch of scenes thrown together. I was also a little underwhelmed. I didn't have that overwhelming joy that I had with the Guardians of the Galaxy Vol. 2 trailer, which is really what I wanted. There are a bunch of great elements in this trailer that make me really excited for Spider-Man: Homecoming, and I'm looking forward to seeing another trailer down the line. 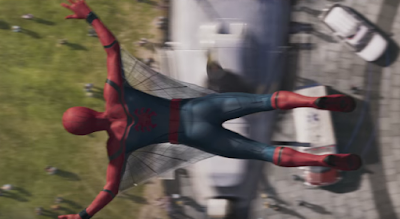 What do you think? Did you like the first trailer for Spider-Man: Homecoming? Are you looking forward to seeing the film? Leave your thoughts in the comments section below.