First Trailer for War for the Planet of the Apes

This trailer is awesome! The scope is absolutely incredible. This is going to be a huge movie, filled with explosions and gunfire and fantastic action. But the trailer opens with a personal moment with Caesar (Serkis), and I think that's truly indicative of what this franchise is. Amidst the scope and action, you have truly personal moments, and that's what makes these movies so great. I'm glad to see that War doesn't have any intentions in changing that. Woody Harrelson looks good as the Colonel, the villain of the movie. We don't see a lot of him, but I'm hopeful that we'll get a quality villain out of him. The one shot where he's looking at a picture of a girl, presumably his daughter, goes to show that there will be more development of his character, which is crucial in making him work as a villain. This one is directed by Matt Reeves, who did Dawn as well. The style is very similar to that one, and I think it's going to work for the betterment of the movie. Overall, I loved this trailer. The action looks fantastic. The character moments look wonderful. And the CGI is impeccable. I think War for the Planet of the Apes is going to turn out to be something truly incredible. 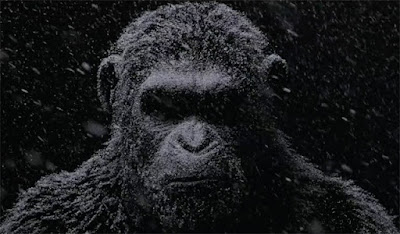 What do you think? Did you like the first trailer for War for the Planet of the Apes? Are you looking forward to seeing the film? Leave your thoughts in the comments section below.