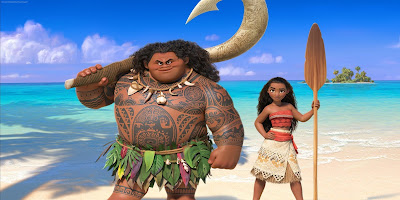 Moana is a film I've been hesitant about for a while. The trailers haven't really blown me away; they've just been good. Plus, I was already blown away by earlier animated movies this year, such as Zootopia and Kubo and the Two Strings. So I didn't think that Moana really had the potential to beat out either of those for me. It just never stood out to me as being something noteworthy or special, but rather just a movie that could be skipped. However, it was getting really great praise, so I decided to see it. Going in, I was expecting it to end up being really good, but nothing compared to how great the other animated films have been this year. And I'm happy to say that my expectations were thrown out the window immediately. Moana is a beautiful and powerful film that deals with very mature and adult themes in an incredibly fun way, with fantastic music by Lin-Manuel Miranda and great voice-over performances from Auli'i Cravalho and Dwayne Johnson.

Moana (Cravalho) is next in line to be Chief of her people, but she is drawn to the forbidden sea instead. When the vegetation and animal life on her island begin to die out, she sets out on a quest to find the demigod Maui (Johnson) in order to restore a stolen artifact to its rightful place. 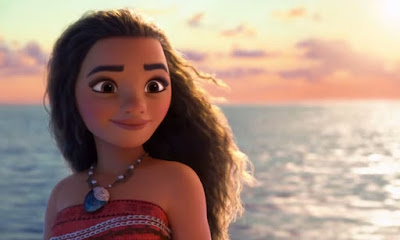 I found Moana to be absolutely mesmerizing. I said before that I went in expecting it to be just pretty good, but within the first ten minutes of watching this movie, I could tell that I was going to be wrong. The best word to describe this film is magical. The animation itself is beautiful. The colors are rich and vibrant, and you see a lot of new environments that we haven't seen in animated movies before. There are some shots in this film that took my breath away, which doesn't usually happen in an animated movie for me. It was just beautiful. And the music by Lin-Manuel Miranda is brilliant! I'm not the biggest fan of musicals, but the music in Moana worked just so damn well. It's catchy, and it really suites the film. It organically works into the movie, and they even occasionally make a couple jokes about the fact that they're singing throughout. I also really appreciated that this film highlighted a very different culture from our own. It shows us Polynesian culture, and the central components of that culture. And they didn't cast white actors to do the voice-overs! This was something that I was happy to see. As much as I loved Kubo and the Two Strings and it's spotlight on Asian culture, it really bothered me that they got Charlize Theron and Matthew McConaughey to play Asian characters. And when they did have Asian actors, such as the great George Takei, he had only a couple lines. What Kubo did wrong, Moana did right. It celebrates Polynesian culture with a diverse cast, and that was something this film really needed to do right.

The voice-over work is also great! Auli'i Cravalho has never acted in anything before, and was discovered for this movie, and I thought she was fantastic. I was very impressed with her level of emoting and the depth she brought to her voice-over work, as well as her singing voice. She has an incredible voice, and it really made her solos captivating to watch. I think Cravalho has a great future in Hollywood. But I think the stand-out for me was Dwayne Johnson. I think he's my favorite person working in Hollywood today, because of how strong his personality is, how attentive to the fans he is, and how hard he works. He gives 120% in everything he does, even in a movie I don't necessarily like, such as this year's Central Intelligence. Not only is Johnson funny and charismatic as Maui, but he proves he can sing! I walked out thinking to myself "Is there anything that Dwayne Johnson can't do?" The two of them make for a great, dynamic pair, and their voice-over work is impeccable. 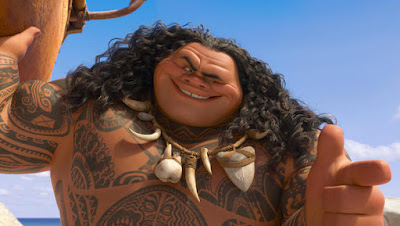 I do have very few negatives. There are some pacing issues towards the middle of the film. I also thought there were a couple parts in the movie that weren't nearly as powerful or captivating as other parts of the film. I don't think they needed to necessarily be cut out, but I think they would have served the story better had they been reworked. There were also a couple of predictable parts that could've been done differently in order to change things up. But I'm really nitpicking here. Moana is fantastic, and I highly recommend it. Another positive element I wanted to touch upon was its message. It has a lot to say about following your dreams, not letting people define who you are, as well as commenting on things like ego and vanity. It never hits you over the head with it, and it perfectly utilizes the visuals and the music in order to convey this in a relatively subtle way. I think it has a lot of merits for children, and it even touched me in a particular way. This is really an animated movie that I think kids and adults alike can really love and appreciate.

Overall, Moana is a brilliant movie. It has incredible visuals that left me awe-struck, even for an animated movie. The music is excellent, written by Lin-Manuel Miranda, who proves himself once again to be an amazing talent. It successfully highlights a unique culture, and doesn't white-wash the cast in doing so. Auli'i Cravalho makes her film debut, and she's fantastic. Dwayne Johnson once again proves himself to be one of the most talented people working in Hollywood today, and shows that he has a wonderful singing voice! And the film's message is incredibly profound and geniusly wired into the fabric of the visuals and the music. There are a few pacing issues and a couple of predictable moments, but Moana is truly a magical film that everyone can find something in it to enjoy.

What do you think? Have you seen Moana? Did you like the film? Leave your (spoiler-free) thoughts in the comments section below.