First Trailer for The Mummy

After the failure of Dracula Untold, Universal has been trying desperately to re-brand their Monsters Cinematic Universe. The next installment will be next year's The Mummy, starring Tom Cruise. While Dracula Untold was supposed to be apart of this universe, it has since been axed due to its underperformance, and The Mummy will now serve as a soft reboot, in order to kick things further into gear. We already know that down the road Russell Crowe will be playing Doctor Jekyll, and Johnny Depp will be the Invisible Man. But little is know about The Mummy, even though it hits theaters in about six months. We don't know much about the story, nor how it exactly ties into a larger universe. But we did know that a trailer was coming soon that would hopefully clear some of those things up. Now, we have that trailer and, unfortunately, a lot of things are still left in the dark.

This trailer wasn't what I was exactly expecting. It spends most of the trailer focusing on a plane crash which, while exciting to watch, didn't do much to showcase the story of The Mummy. You could've shown me that part of the trailer and I would've thought it was the next Mission: Impossible movie or something. Then crammed in during the last thirty seconds we get some teases of Sofia Boutella as the Mummy, and some expositional narration from Russell Crowe. This trailer really didn't do much for me. It showed me some cool shots and sequences, but all it did was excite me for another Tom Cruise movie, not another Mummy movie. The Mummy has been completely off people's radars for a while, and this trailer really needed to strike hard in order to bring attention to it. Unfortunately, I don't think it was constructed well enough to inform people what this project actually is, because I'm not so clear on it myself. It didn't do enough to explain what exactly they're going for here. Hopefully a second trailer will explain a few more things, because I'm still as confused on The Mummy as I was before I watched this trailer. 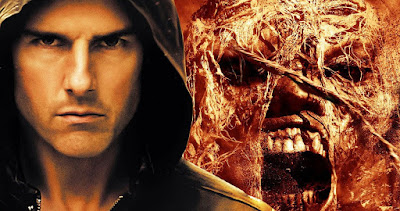 What do you think? Did you like the trailer for The Mummy? Are you looking forward to seeing the film? Leave your thoughts in the comments section below.