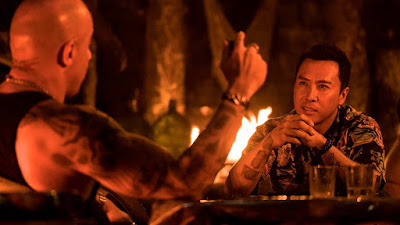 There is some fun to be had with xXx. There are some cool scenes and fun action sequences that are genuinely enjoyable. However, the trailer spoils most of them. This movie is simply a check list of every single beat the trailers hit. I'd seen about 90% of the movie in the trailers, and that was disappointing. Like I said though, there is some fun to be had, mainly surrounding Donnie Yen's character. He was actually a compelling character, and his fight scenes were by far the best. I was blown away by how much ass he kicked. Between this and Rogue One: A Star Wars Story, I think Yen can make a career out of being an action star. This movie proves that he can pull it off. So that was a very pleasant surprise. There some cool fight scenes involving Diesel, but not a ton. Outside of that, there aren't many good things about this movie.

The script is pretty bad. I anticipated that there were going to be some ridiculous moments, some conveniences, and some questionable dialogue, but I wasn't prepared for this. Let's start with the dialogue. It was laughable. There weren't many cool lines, like Samuel L. Jackson's line from the trailer. It was mostly just cringe-worthy lines that made me sink in my seat. The story doesn't make much sense. They tell you what the plot is, but it doesn't really make much sense. They then just jump around to all these places for really no reason. It loosely tries to explain it, but the movie just assumes you've already checked out at this point. And speaking of Samuel L. Jackson, but he's barely in this movie. The trailers hype him up to be an integral part of the film, but he's in it for maybe five minutes. That was a disappointment, since I really love Jackson as an actor. The acting in this film is abysmal. Vin Diesel is okay, but he just comes across as a complete dick. He's not nearly as likable as he is in the Fast and Furious movies. Donnie Yen was good, but I already talked about him. Nina Dobrev plays this character who's supposed to be the comedic relief, but she just comes across as such a bumbling idiot, and her comedy feels so forced, that it was painful to watch. But Toni Collette was a train wreck. This is by far the worst I've seen her. She wasn't even trying to sell her dialogue by the end of the film. I loved her in The Sixth Sense, so to see her give in such a terrible performance... it was saddening.

Overall, xXx: Return of Xander Cage is forgettable. Where it should've been fun and entertaining, it just dragged on from pointless scene to pointless scene. Vin Diesel is a pretty unlikable protagonist. Donnie Yen is actually a formidable villain, and has the best action sequences by far. Xander Cage's team were not only underdeveloped, but they were completely underutilized as well. They set them up to be this potentially badass team, but then nothing comes of it. Samuel L. Jackson was barely in the film, considering he was in so much of the marketing. Nina Dobrev was painful to watch, and Toni Collette turns in an atrocious performance. There is actually an exciting cameo near the end of the film. I won't spoil it, but I had unfortunately had it spoiled for me in a TV spot, so it didn't have the effect on me that it should've. Literally, most of this movie is in the trailers and promotional material. The script was bad. The dialogue was cringe-worthy. The action scenes weren't outstanding. The CGI was laughable. This should've been a lot better than it was. I wasn't expecting it to be a fantastic movie; I just wanted to have fun. And this movie couldn't even give me that. This movie is so forgettable and underwhelming. It's really half-assed, and it's not worth seeing.