In Preparation For: John Wick 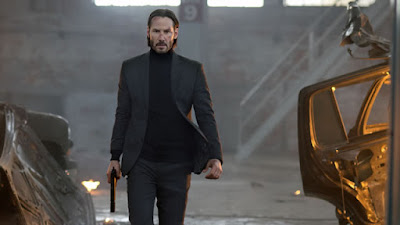 With John Wick: Chapter Two hitting theaters this weekend, I thought I would review the original. I missed seeing it in theaters, mainly because I didn't think it looked all that special. Keanu Reeves starred in my favorite movie, The Matrix, but has been known to be in some less than stellar films. I just kind of assumed John Wick would fall under the same umbrella. However, when the film hit theaters, everyone was raving about it. Still, I didn't get a chance to see it until it came out on Blu-Ray, and I loved it! It's probably Reeves' best film since The Matrix. It's truly an awesome film. So since I didn't get to review it when it came out, I thought I'd re-watch it and review it in preparation for Chapter Two. So, without further ado, let's get to it. Warning: There will be spoilers for John Wick. If you have not seen the film, go watch it and then come back to this review later.

John Wick (Reeves) is a retired assassin who is mourning the loss of his wife when his former boss's ignorant son (Alfie Allen) breaks into Wick's house, beats him, steals his car, and kills his dog. Now, Wick is back in the game and out on a bloody rampage in order to seek revenge. 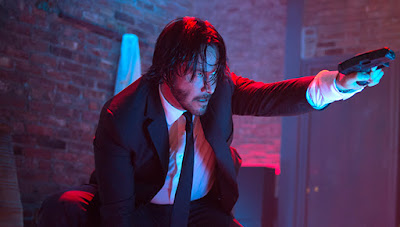 This film is directed by Chad Stahelski and David Leitch, who haven't directed a movie before. Rather, they were stuntmen, who worked on films such as The Matrix, 300 and The Hunger Games. They came from the world of stunts, knowing how integral and important they are to the success of an action movie. In hindsight, this made them perfect directors to helm something such as John Wick, because the stunts are unequivocally the most impressive part of this film. What Stahelski and Leitch are able to pull off with what limited budget they had is incredible, and is really what sucks you into this movie. This film is set up perfectly. We're introduced to Wick as a man grieving his late wife, who is gifted a puppy. We see some hints that he's not your average Joe, but nothing too out of the ordinary. But as soon as Wick is robbed and his dog is killed, the film takes a drastic turn. Pretty much every character is scared sh*tless of John Wick. When Viggo (Michael Nyqvist) learns that John Wick was the one his son had robbed, he simply mutters "Oh" and hangs up the phone. This really builds Wick up as a character, but it would be nothing but hollow if the action didn't deliver on him being this terrifying Boogeyman everyone is claiming him to be. When the action hits, it hits hard. The stunts come into play, and the first action sequence in Wick's house is jaw-dropping.

The development of this new action choreography technique called "gun-fu" is truly innovative within the film. Wick's gun almost becomes apart of his body, as he uses it to tear through dozens of men. It's something we haven't really seen before on screen, and it worked beautifully. I think Keanu Reeves' performance is often overlooked in this film in favor of the action. Don't get me wrong: he wasn't robbed of any Academy Awards or anything, but he turns in a really strong performance for someone who's been dubbed the "best bad actor in Hollywood". You feel his pain. You feel his rage. Part of that is due to the writing and the direction, but you have to give Reeves credit for selling it. You also have great supporting performances from Nyqvist and Willem Dafoe. Nyqvist was a great villain because he was formidable in his own right, but he was also terrified of Wick. You knew he didn't stand a chance, and yet he was still a compelling villain. And I always love to see Dafoe pop up in films, even if it is brief, like with John Wick. 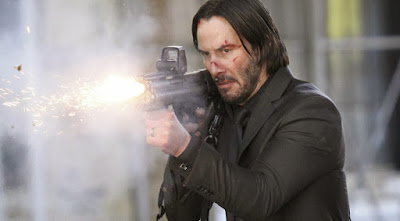 I do have a few complaints. We get a lot of gunplay, but I do wish we got more hand-to-hand combat. With my action movies, I do tend to prefer fist fights more so than gun fights. There was some accommodation to this with "gun-fu", but I would've liked a couple of true fist fights. Maybe that's something that we'll get more of in the sequel. I also don't like how the film opens with the shot of John Wick bleeding out, and then it goes into the movie. It doesn't really add anything to the movie, and it just feels unnecessary. It would've been better had it just gone straight into the movie. A problem I used to have was how Wick was so vulnerable when fighting. He'll get hit a lot. He'll get winded. He'll take five minutes to take one man down. That used to bother me, but I've come to appreciate that about John Wick. We're not getting some impervious action hero. John Wick isn't superhuman. He's a man who bleeds and can be hurt. He will take five minutes to kill one person, and it's gripping watching them struggle for control over the fight. Like I said, it's something that used to bother me, but I've come to really enjoy that part of this film.

Overall, John Wick is entertaining as hell! It's a well developed film that gives us strong, compelling reasons to root for our protagonist. It builds Wick up as a character, and then absolutely delivers on its promises. The stunt work and action choreography is top notch, with directors Chad Stahelski and David Leitch truly understanding the field. The development and utilization of "gun-fu" is incredibly innovative, and is something we haven't really seen before. Keanu Reeves gives a great performance, selling us on this hardened, revenge-seeking man. Michael Nyqvist and Willem Dafoe also give good supporting performances. I do wish the film hadn't opened with the shot of Wick bleeding, and that it had just gone straight into the movie. I also wish there were a couple more hand-to-hand fights, as opposed to all shoot-outs. I've also come around to appreciating Wick's vulnerability and morality as a character. In the end, John Wick is an excellent action film, and one of the best in recent years. I absolutely cannot wait to check out the sequel. 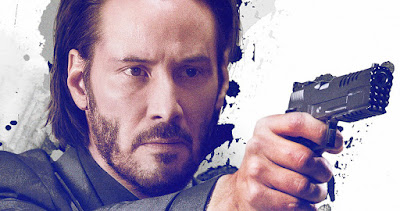 What do you think? Have you seen John Wick? Did you like the film? Are you looking forward to John Wick: Chapter Two? Leave your thoughts in the comments section below.