Up until recently, I hadn't heard of Geostorm. But a few weeks ago, a story broke about how this film, starring Gerard Butler, had been filmed a couple years ago, and was just sitting on the shelf. Then, a new studio bought the film and underwent major reshoots that cost something like $10 million dollars. So I immediately cataloged the name Geostorm, because I knew it was going to be one hell of a movie to check out later. The plot is also completely contrived. The IMDb plot description reads: as a man heads into space to prevent climate-controlling satellites from creating a storm of epic proportions, his brother discovers a plot to assassinate the president. That is two separate movies just bashed and forced into one. So all of these elements created the perfect storm (pun intended) for a bad movie, and one that would be fun to watch. The kind that is so utterly ridiculous that you just laugh throughout the whole thing and end up having a good time. And now we have a trailer for Geostorm, and it looks just as ridiculous as we all thought it would be.

Let me count the cliches in this trailer. They pretty much begin the trailer with "In a world...". The satellite footage they show looks like it was stolen from Gravity or Life, honestly. We then see a bunch of shots of destruction porn, very much reminiscent of Independence Day: Resurgence. And if the similarities to that film weren't enough, they reveal that it's actually from the producers of Independence Day. F*cking perfect. You get the slow, ominous cover of a famous song in the background, which seems to be the new trailer norm. The CGI in the beginning was surprisingly good, but by the time we get to the end with the tidal wave of water, it looks like a f*cking video game. I'm betting that's what the movie will look like: there will be a few shots of surprisingly good CGI, and then most of the movie will just look like ass. We don't see a lot of Gerard Butler in this trailer, which did surprise me. You would think they would market the hell out of him. It's not shocking that he's in a movie like this, though. While he's been in some very good movies, he's known for starring in particularly bad films (Gods of Egypt, anyone?). I can't for the life of me understand why Ed Harris is in this movie. He doesn't have a perfect track record, but this seems so beneath him. Did his wife want a new deck or something? I don't know. I'm going to see this movie because I know it's going to be awful and it will be fun to make sh*t on it. But it's going to bomb at the box office, however. It probably should have just stayed on the shelf. 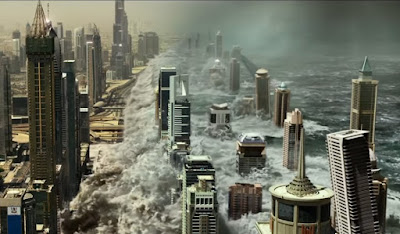 What do you think? Did you like the trailer for Geostorm? Are you looking forward to seeing the film? Leave your thoughts in the comments section below.