Guardians of the Galaxy Vol. 2 is my most anticipated film of the year. The first Guardians came so far out of left field that it took us all by surprise with just how good it was. It was funny, action-packed, with really great character moments and development. James Gunn absolutely nailed that movie, and I've been excited for the sequel ever since. With the release of the first trailer, we knew instantly that we were right back in this world. Gunn wasn't going to change up this sequel to be something different from the first one (at least not too much). We were still going to get the humor, the action, and the character moments. Everything that was quintessential to Guardians of the Galaxy being what it was seemingly has carried over, and now Gunn can really expand. That first trailer was reassuring to me, and I was looking forward to seeing a new trailer. I wanted to see more of what this film has in store for us, as well as a look at Kurt Russell as Star-Lord's (Chris Pratt) dad, Ego. So with all of that in mind, I was very excited to watch the Vol. 2 trailer this morning, and I didn't think it was all that great.

It's a fine trailer. It does its job. You have a couple jokes, you have some action scenes. But it was such a standard, traditional trailer for a very atypical movie. I liked the first trailer so much better. But there were some very good parts in this trailer. The part with Rocket Raccoon (Bradley Cooper) calling the council "douche bags" and winking was really funny. Other than that, I found it to be an average, forgettable trailer. I did not like the music choice at all. I like that Gunn is trying to bring more variety to the soundtrack, but I don't think this particular song worked for this trailer. We needed a more powerful, aggressive song rather than the passive one we got. I liked the bit at the end with Kurt Russell. I didn't want to see any more of him in the trailer. All I wanted was that quick glimpse. After seeing him in action, I really think Russell was the perfect choice to play Pratt's dad. They look a lot alike, and I think they'll be able to comedically play off of each other perfectly. So, overall, the trailer had some good parts and a couple funny lines, but I found it to mostly be an okay trailer at best that didn't do much to increase my excitement for the film, like what the first trailer did. 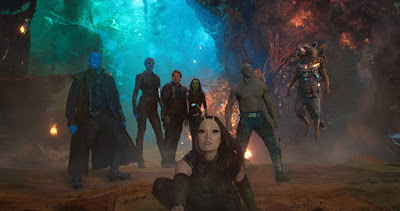 What do you think? Did you like the second trailer for Guardians of the Galaxy Vol. 2? Are you looking forward to seeing the film? Leave your thoughts in the comments section below.