Comparative to other comic book movies coming out this year, I haven't been very excited for Justice League. The disappointment of Batman v. Superman: Dawn of Justice (and Suicide Squad) really took away a lot of the excitement I had for Justice League, and my enthusiasm has mellowed a lot. The film didn't crack my top ten for most anticipated movies of 2017, nor did it make my honorable mentions. It just feels to me like this is going to be more of the same, what with it coming from Zack Snyder and all. While I feel Snyder knocked it out of the park with Man of Steel, Batman v. Superman was just so lackluster and disappointing that I was immediately disinterested in Justice League. I did like the San Diego Comic Con trailer that dropped, but it was rather unfinished. It wasn't a full trailer. So I've been waiting to see the full-length trailer, in order to really get on board with this film, and get me excited again.  And now, today, DC dropped their first full-length trailer for Justice League.

Alright, this trailer is f*cking awesome! There are so many awesome shots, paired with a great song. Everyone looks badass in this trailer. It's a really great trailer. I liked it a lot, so keep that in mind. It's really good looking, but I never doubted it would look great. People didn't dislike Batman v. Superman because of how it looked; they disliked it because of its story. And this trailer doesn't give us any real indication of what the story will be. We can surmise, but I don't know anything more about the story than I did before. It is filled with just action poses and badass scenes, which work for this trailer. It got me hyped for the movie, which is what it was supposed to do. But I still have my hesitations about the film. There's nothing in this trailer that really alleviates my fears about the movie's story. Zack Snyder's movies all look beautiful. He knows how to handle visuals. It's his stories that need work, and I don't see any indication in this trailer that it will fare any differently than Batman v. Superman. I'm hopeful. At the least, I think we'll get a lot of great action, even if the story isn't the strongest. But, with this film, I hope Snyder went more Man of Steel than Batman v. Superman, and gives us kickass action paired with a compelling story. I hope that's how Justice League turns out. With this trailer, I have a little more faith now than I did before, but I'm still not entirely sold that this is, overall, going to be great. 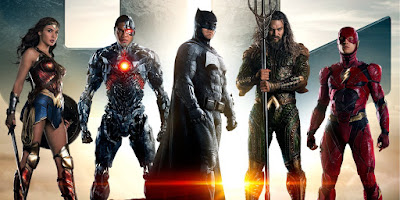