I have been really excited to see Life for some time now. I have really liked the trailers, and I think the cast is great. Jake Gyllenhaal, Ryan Reynolds, and Rebecca Ferguson are all fantastic actors. Plus it's written by Deadpool writers Rhett Reese and Paul Wernick. I've actually had a running bet with our other writer, Rob, about what the rating for this film will be. I read an interview with Reese and Wernick a while back where they said they were going for a hard R rating. But Rob believed that the studio had cut it down to a PG-13. With $10 on the line, I've been anxiously checking the rating for this movie every single day for weeks now. It is strange that, with the movie being just over a week out, there is still no official rating for it. It was definitely a cause for concern, because maybe they were butchering the film in the editing room, trying to get it down to PG-13. Whenever a studio does that, it's not a good sign. A movie should be rated whatever a movie deserves to be rated. Ruining a movie to get it to a PG-13 rating doesn't do anyone any good. So I've been nervous that that could be happening to Life. But my fears have been relieved (and my wallet has grown bigger), as we have a redband trailer for the film, confirming its R rating.

This was my favorite trailer for the film by far! It was genuinely terrifying. While there have been moments of horror in the previous trailers, this one was chilling the whole way through. I maintain that it feels like a mix of Alien and The Thing, in the best way possible. I was previously afraid that it may be ripping off those movies, but these last couple trailers have really shown me that they're actually paying homage to those films. It's great to see a Sci Fi horror film honor what came before it in this fashion. We see a lot of the same shots in this trailer that we've sen before, but with more added around it. It's as if the previous trailers were hiding the R-rated material. Usually, I'm done watching trailers by the third one, but I was happy to watch this. Other than its rating, I know nothing new about the movie, and it's great. I think this movie will be full of surprises, and it has really led a great marketing campaign. This was an incredibly effective trailer that will get people (like Rob) who weren't on board interested in this film. I have no doubts now that this will be a great movie, and I cannot wait to see it! 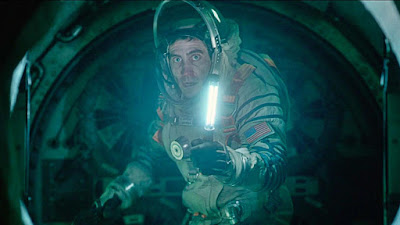 What do you think? Did you like the redband trailer for Life? Are you looking forward to seeing the film? Leave your thoughts in the comments section below.