In this installment, we will talk about whether Rotten Tomatoes is really destroying the film industry. 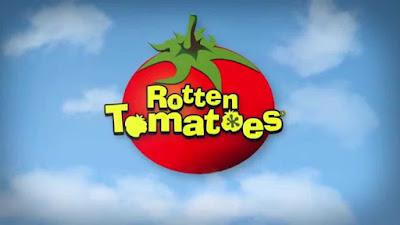 X-Men: The Last Stand and Tower Heist director Brett Ratner recently spoke out about the website Rotten Tomatoes, having this to say about it:

"The worst thing that we have in today's movie culture is Rotten Tomatoes... I think it's the destruction of our business. I have such respect and admiration for film criticism. When I was growing up, film criticism was a real art... there was intellect that went into that. You would read Pauline's Kael's reviews, or some others, and that doesn't exist anymore. Now it's about a number. A compound number of how many positives [reviews] vs. negatives. Now it's about 'What's your Rotten Tomatoes score?' And that's sad, because the Rotten Tomatoes score was so low on Batman v. Superman, I think it put a cloud over a movie that was incredibly successful."

Those are some pretty strong words, and I want to get into whether Ratner is actually correct in what he's saying, or if he's got it all wrong. But let's get some things straight first.

How Does Rotten Tomatoes Actually Work? 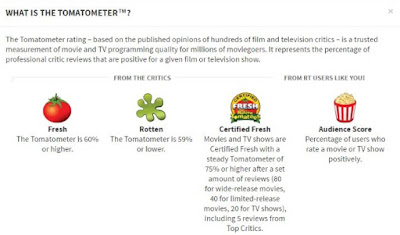 Rotten Tomatoes has become the saving grace of the average film fan. For the uninitiated, it compiles all of the Internet's film critics' reviews for a particular movie and averages the ratings based upon whether they gave it a fresh review (above 6/10) or a rotten review (below 6/10). So if a film gets a 40% percent on Rotten Tomatoes, it doesn't mean that the average score from critics is 40%. Rather, it means that 40% of critics gave it a fresh rating, where as 60% gave it a rotten rating. So a movie can get a 95% on Rotten Tomatoes, but the individual scores that each critic gave the film could have been a 6/10, just making it fresh. Even though 95% of the critics gave it a fresh rating, their scores could have just barely been fresh. Subsequently, a movie can have a 25% on Rotten Tomatoes, but each critic that gave it a poor review gave it a 5/10, which is just barely rotten. Usually, however, if a movie is really on the fence like that, there are enough good and bad reviews to even out the overall Rotten Tomatoes score. The best way to avoid this loophole is to look at the "Average Rating" statistic on the website, which gives you the average rating each critic gives the film. That can give you a better understanding of how good the movie is on its own, rather than just how many critics liked the movie.

This is not a perfect system, but it's a system that works. Fans can quickly look and see how a movie is doing. Yes, there are times where a disliked movie will have a high rating, and a liked movie will have a low rating, but that is really every once in a while. Like I said before, the system usually evens itself out. The reason why this format is good for fans is because they can quickly see what the reception is for the film. A fan can see whether people are really responding well to the new Power Rangers movie, or if Kong: Skull Island is getting good reviews. It has all the reviews compiled, so you can click on individual reviews and read why The Hollywood Reporter gave this movie a rotten review, or why Variety gave this film a fresh review. Rotten Tomatoes is a great way to get straight statistics fast. Your opinion on a film should not be formed solely based upon the number given to a film, but what that number actually represents. Rotten Tomatoes should be a vessel to help you form your opinion, not what you actually form your opinion on. The backlash and criticism against Rotten Tomatoes mainly stems from the fact that not everyone understands what that 95% score actually means when they see it on the screen. 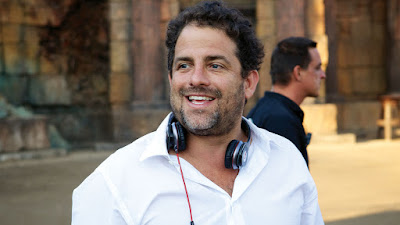 Ratner says that Rotten Tomatoes is "the destruction of [the film industry]". So is he correct? I think Ratner brings up some very valid points, but I do believe that he is ultimately wrong. People do fixate solely on the number score that appears when you click on a movie on Rotten Tomatoes. People see 95%, and associate that as critics giving the film an A, when that is not the case. Like I said before, the problem is that not everyone understands what the score actually means. This confusion does lead to people putting the score up on a pedestal. It's all about what Rotten Tomatoes score you got, rather than what the individual critics are actually saying about your movie. There is a tendency for people these days to oversimplify things. If you got a rotten score on Rotten Tomatoes, then your movie is bad! Well, not necessarily. That just means that more critics disliked the film than liked it. Read some reviews. Check out the average rating. Maybe the problems critics are having with the movie are things that don't matter as much to you. Maybe the positive reviews for that movie click with you. If the buck stops at the rating, then it undoes the whole point of Rotten Tomatoes, which is to make information more readily accessible to people so that they can form their own opinion from it.

On the other hand, I do think Ratner is wrong on this issue. Rotten Tomatoes does not mean the destruction of the film industry; it means the destruction of sh*tty movies. Before, you can put out a sh*tty movie and hope you make half your budget back in the opening weekend. But now, because of the success of a site like Rotten Tomatoes, studios and filmmakers are held accountable for their movies. If you turn out a sh*tty film, people are going to see it has a 9% on Rotten Tomatoes. You can no longer hide it, because people will see what the critics are saying. Ratner brought up Batman v. Superman, which is a terrible example, because it was not a good movie. People have widely different opinions on the film, but only 27% of 335 critics (so 97 critics total) gave the film a fresh review. Now, do I think the film is better than a 27/100 score (which is an F)? Yes, obviously. But 27% on Rotten Tomatoes does not mean 27/100. Ratner tries to make Batman v. Superman out to be some kind of masterpiece that was ruined in the eyes of fans by its Rotten Tomatoes score, when, in actuality, Rotten Tomatoes simply regurgitated information that held Warner Bros. accountable for their mediocre-poor film. Telling fans whether critics liked a film does not hurt film criticism; it propels it. Rotten Tomatoes encourages film criticism, because it gives new light to them. With Rotten Tomatoes, people can more easily access film reviews, and thus new meaning is given to, as Ratner describes it, the "art" of film criticism. 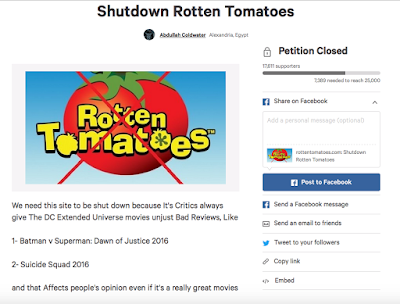 The idea of blaming Rotten Tomatoes because a film you like got a rotten score is just ludicrous. We all have different opinions, and see things in different ways. I did not like Batman v. Superman, and I hated Suicide Squad. But our other writer, Rob, loved Batman v. Superman, and really liked Suicide Squad. We all see things differently because we are all different people, and that's part of what makes movie fandom so much fun. We get to talk and debate and express our opinions. I loved Kong: Skull Island, and I know a lot of people didn't like it. But it's fun to talk about why we liked certain things, and why we don't like other things. But lashing out at a website that simply compiles data because a movie you really like was not liked as much by critics is really absurd. Brett Ratner may have really liked Batman v. Superman. Unfortunately for him, 73% of critics did not. Now, I see where Ratner is coming from in terms of how people perceive and understand the Rotten Tomatoes score. Not everyone understands that the score refers to the percentage of critics who gave the film a fresh rating, rather than the average rating by the critics. This misunderstanding does lead to fans categorizing films in ways that are ultimately unfair. We as film fans really need to take it upon ourselves to educate the masses, and to make sure that people know what they are looking at when they go to rottentomatoes.com.

But this notion that Rotten Tomatoes is destroying the film industry is not only complete hyperbole, but it is also inherently wrong. By bring to the forefront aggregated ratings and compiled data, fans are being exposed to film criticism in a way that they never have been before. Fans have the ability to look through critics' individual reviews, and are being introduced to new sites and new reviewers they may never have had the opportunity to ever experience before. It also holds filmmakers and studios accountable for their movies, as now people are paying far closer attention to how a film is received. Studios are having far less success dumping sh*tty movies and hoping to make some money in the opening weekend, because fans have tools at their disposal to know whether a movie is being well-received or not. Also, keep in mind that not ever movie-goer has ample amounts of money to spend on every film that comes out. They may only get to see two to three films a year, and they want to make sure that the movies they do go and see are worth their money and their time. Rotten Tomatoes lets that person immediately see whether they want to spend $20+ on the new movie coming out that week, or if it would be better to wait for VOD. So does Rotten Tomatoes have its faults? Yes, it does. But is it the destruction of the film industry, and the death of film criticism? Not at all. 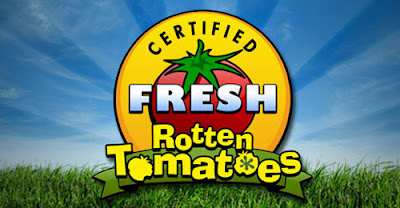