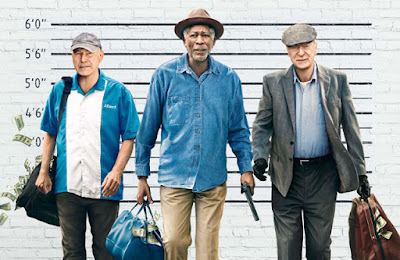 I had never heard of this film until I saw the trailer back when Patriots Day was in theaters. And when I saw that trailer, I laughed. I laughed a lot. Morgan Freeman, Michael Caine, and Alan Arkin are all brilliant actors, and to see these legends team up for a comedy like this sounded like pure genius! So since then, I've been pretty excited for the film. I didn't have Star Wars Episode VIII: The Last Jedi level expectations. I wasn't giddy sitting in the theater like I will be when I see Guardians of the Galaxy Vol. 2. But in this season of blockbuster after blockbuster after blockbuster, it's nice to have a smaller film that can deliver on just pure entertainment, without any kind of connected universe and cannon to worry about. This didn't need to be the next big comedy. I was just looking to have fun for an hour and a half with a trio of actors I love and have grown up watching. All I wanted was to have a good time, and I did. Going in Style isn't going to be some kind of megastar box office sensation, or receive a standing ovation from critics. But it knows what it is, and it delivers on what you ultimately want it to be.

After their pensions are ended and the bank threatens to foreclose on their houses, three elderly men decide to rob the bank in order to keep their livelihoods. 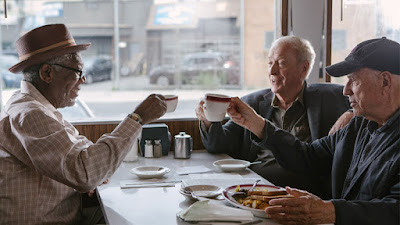 The best part about this movie is seeing Morgan Freeman, Michael Caine, and Alan Arkin all on screen together. They have fantastic chemistry, and you really feel like their characters have actually been friends for 30+ years. They just glow on screen, and seeing them riff on each other and have a good time made for me to have a good time as well. They all gave great performances. The supporting cast was also really good. It was fun to see Christopher Lloyd pop up in a film again. We also got see some good performances from Kenan Thompson and Ann-Margret. Look, with this movie, there are no revolutionary jokes. It's everything you would expect there to be. I do tend to prefer edgier comedy than this, but I made my peace with it the second the first joke hit. This isn't meant to be a Seth Rogen kind of comedy. This is supposed to just be a fun, light-hearted, feel-good comedy, and it was really good for what it was. The film does have some stale jokes and some pacing issues, but you were able to forgive that for what they did deliver on. I overall liked the writing quite a bit. Theodore Melfi wrote it, who directed the Oscar-nominated film Hidden Figures last year. This film didn't have the same kick that Hidden Figures had, but this wasn't that kind of movie. Again, for what it was, I rather enjoyed Going in Style.

Like I said before, it wasn't a revolutionary comedy. While I didn't think it needed to be, I would have liked a few more memorable scenes. Freeman, Caine, and Arkin attempting their first robbery does stand out, because I was laughing straight through the whole scene. And there are one or two lines that I do remember, which I won't spoil for you. But I would have liked there to be a little more that I would remember after the credits rolled. I wish there were lines that I couldn't stop quoting, or that scene that I would tell all my friends they have to go and see. While Going in Style didn't necessarily need that, I wish it did have that, because then I think it would definitely have more replay value with it. I enjoyed watching it the first time, but unless I see it on Netflix in a couple years, I probably won't watch it again. The film itself is forgettable, but you do remember that you had a good time with it. Had the film had a little more kick and power to it, I think it would be a lot more memorable, and you would have a lot more people wanting to see it a second and a third time. Unfortunately, it just doesn't have that kind of staying power. 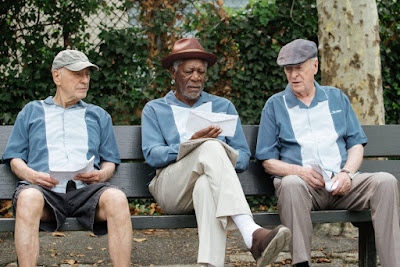 Overall, Going in Style knows what it is, and is a very entertaining film. It's not going to be considered an all-time classic comedy, nor does it need to be. It's serviceable for what it needs to do, which is simply to entertain you for an hour and a half. The best part was seeing these film legends, Michael Caine, Morgan Freeman, and Alan Arkin, all on screen together. They had fantastic chemistry, and it made for a really fun movie to watch. However, with the premise being about their age, it made me sad thinking of the actors' mortality. I don't want to think of a world without these actors, and it did make me sad when the film considered such issues of death and loss. It's a well-written script, with good performances all around. I would say, however, that it was missing the little bit of power it needed to be truly memorable. It doesn't have the quotable lines or the unforgettable scene, which does hinder its replay value. I won't remember the specifics of this movie in two months, but I'll remember that I enjoyed watching it. In the end, Going in Style is a great film to kick back and enjoy for an hour and a half, but it doesn't do much other than simply entertain you. 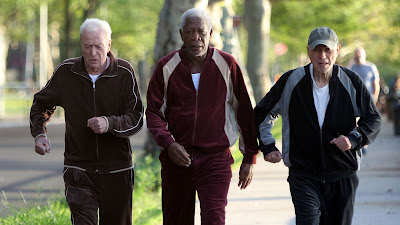 What do you think? Have you seen Going in Style? Did you like the film? Leave your (spoiler-free) thoughts in the comments section below.