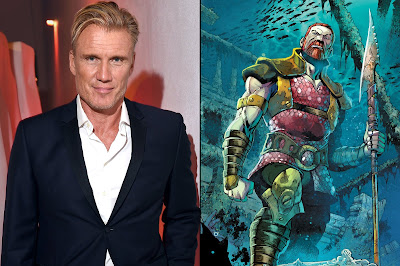 It has been confirmed that actor Dolph Lundgren has been cast to play King Nereus in Aquaman, joining Jason Momoa and Amber Heard. This story caught me by surprise when I first heard it, mainly because when I think of fine acting, Dolph Lundgren doesn't necessarily come to mind. But he does have the physical look that would fit a rough, tough, badass king. And Jason Momoa is also a very tough looking dude, so Lundgren would fit right into that world. I can't speak much of his acting ability, but I think director James Wan can figure out ways to work around it. In the comics, Nereus is the leader of an outcast group of Atlanteans called the Xebels, who have direct ties with Mera (Heard). This puts Lundgren in more of a villainous role, which I think would fit his abilities a bit better. Again, I don't think he's the greatest actor ever, but I do think Wan can use him well, especially if he's a villain. The cast for Aquaman continues to grow, and this is really the first casting choice that has given me pause. But, at least with this particular film, I have faith in DC. I think Wan is going to do a brilliant job with this movie, and I really can't wait to see it. 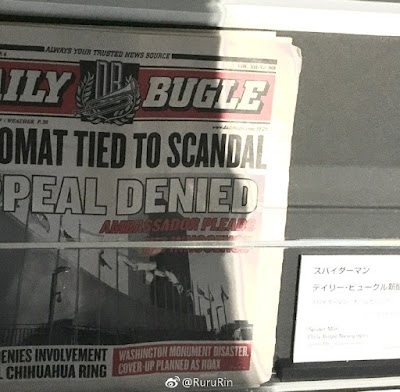 A picture was recently released (above) that seemingly confirms the existence of the Daily Bugle, the iconic Marvel newspaper company, in Spider-Man: Homecoming. Now, this is coming from an Instagram page (which isn't the most reliable of sources), so we have to take this with a grain of salt. This could very well not be true, but I'm going to be operating on the assumption that it is true. If this is in fact true, then it makes me really happy, because the Daily Bugle is such an integral part of Peter Parker's (Tom Holland) character. The Sam Raimi Spider-Man trilogy did a great job of utilizing this. J.K. Simmons was absolutely brilliant as J. Jonah Jameson, and you can't really do much better than that. Which is probably why The Amazing Spider-Man films stayed away from having a physical Daily Bugle, or showing any the characters. Rather, they just showed us a website, and had Peter (Andrew Garfield) receive emails from a faceless Jameson. Now, we haven't heard any casting news for anyone at the Bugle, so my assumption is that we will only see the newspaper in this movie, and Peter won't actually take a job there until maybe the sequel. It's a smart way to keep the door open, should Marvel want to use the Daily Bugle later on down the line. 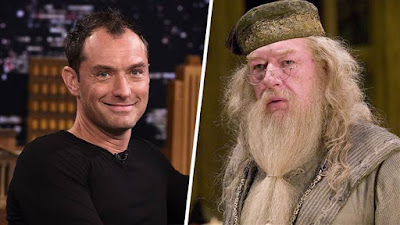 It has been confirmed that actor Jude Law will be playing a younger version of Dumbledore in the Fantastic Beasts and Where to Find Them sequel. I was surprised by how much I liked Fantastic Beasts. I am not the biggest Harry Potter fan, which is why I wasn't exactly jumping up and down to see this spin-off. But I have to say I did enjoy myself quite a bit when I saw it. It wasn't in my top ten of the year or anything like that, but I did have fun with it, and I am definitely up to seeing more movies. But even before the first one came out, we all knew Dumbledore was bound to show up at some point in these spin-off movies. Fantastic Beasts take place about 70 years before the first Harry Potter, which would be prime time for a younger Dumbledore to pop up somewhere. And I do like the casting of Jude Law. I'm surprised he wasn't in the Harry Potter films before, because they seemingly used every famous British actor alive for that series. So at least now Law has his chance to be apart of it. He's a great actor, and I think he'll do nothing but add to the sequels, and will probably be one of the stand out moments in these subsequent movies.

How Star Wars Rogue One Should Have Ended,
courtesy of HISHE

Best Fast and Furious Character is..., courtesy of
Screen Junkies