Thor: Ragnarok has been one of the more interesting comic book movies coming out this year. I haven't been the biggest fan of the previous Thor movies, however. The first one was good. It introduced us to the character and the world, but it wasn't the best stand-alone film Marvel had done, especially when compared to movies like Iron Man. And the second film, Thor: The Dark World, is just boring as sh*t. It's definitely one of the weakest movies in the Marvel Cinematic Universe. But even though the Thor movies haven't been the best, I've been rather excited for Thor: Ragnarok. They've brought in director Taika Waititi, who has an incredibly unique style, similarly to how James Gunn brought his unique style to Guardians of the Galaxy. They've gotten rid of the failed Natalie Portman love story, and instead have brought in Creed actress Tessa Thompson to play Valkyrie, a badass Norse goddess. And, of course, who can leave out the fact that we're finally going to see one of the greatest Hulk comic book storylines, Planet Hulk, brought to life in this film. So while the other Thor movies haven't been the best, there's so much to look forward to with this movie. Hopefully, it can be the best Thor movie made, and I think that is a strong possibility. And to further the excitement, the first teaser trailer for the film has been released.

I loved this trailer! It's strange, it's dark, but at the same time it's colorful and light. It definitely has a Guardians of the Galaxy feel to it, especially with the music playing in the background. I've read many complaints online about how similar the trailer is to Guardians, but I don't see it as a problem at all. Sure, the style is very similar, but I love Guardians trailers. So it doesn't bother me that other films are following in its footsteps. And if any other Marvel property could fit the Guardians formula, it would be Thor, especially a Thor movie directed by Taika Waititi. The style looks incredible. The music was a fantastic fit for the trailer, and really set the mood. The visuals and the action look awesome. Cate Blanchett looks so incredibly badass as Hela. We knew Thor was going to be separated from his hammer in this movie, but we had no idea that Hela would completely shatter it! I really hope she's used better in this film than other Marvel villains have been used in the past. Everything is set up for her to be an incredible villain, and I just hope Ragnarok follows through with it. We see some sparing shots of Tom Hiddleston's Loki, Tessa Thompson as Valkyrie, and Jeff Goldblum as the Grandmaster. And it all looks fantastic. But the money shot is at the end, when Thor is placed in the arena. The gate open and there stands the Hulk (Mark Ruffalo), in full gladiatorial armor straight out of the comic book. Look, this was just a fantastic teaser! It really caught my attention, and got me excited for this movie. I can't wait to see more from this film. 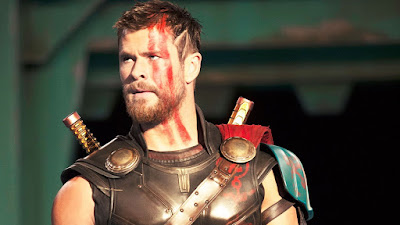 What do you think? Did you like the first trailer for Thor: Ragnarok? Are you looking forward to seeing the film? Leave your thoughts in the comments section below.