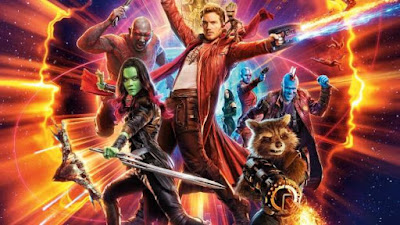 I love the first Guardians of the Galaxy. It was really lightning in a bottle. Writer/director James Gunn infused so much of his own style and creativity into it, which is really what made it work so well. Ultimately, it didn't feel like a Marvel movie. Sure, it was aesthetically the same, but it was such a radically different movie, and such a unique one, that is was completely refreshing. I still hold Guardians of the Galaxy to be one of Marvel's best. It is in the top five for sure. So going into Guardians of the Galaxy Vol. 2, I was losing my f*cking mind for it! It was my most anticipated film of the year. I just could not wait to get back into that world that Gunn so elegantly created, and to go on a new adventure with the Guardians. Now, critics came out saying that it's not as good as the first one, but it's still a really fun time. This forced me to check my expectations a little bit, but I still went in really excited. And the critics weren't wrong. Guardians of the Galaxy Vol. 2 is fun and exciting and exhilarating, but it does suffer from story and pacing issues that hold is back from surpassing the original.

Months after the original Guardians of the Galaxy, Star-Lord (Chris Pratt) meets Ego (Kurt Russell), who is claiming to be his father. With this, Peter Quill must come to terms with his heritage, and who he truly is. 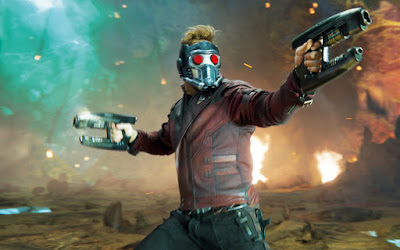 This movie is every bit as fun and exciting as the first. Right from the opening credits, you're hit with same kind of punch that Gunn dealt with the original. For the first third of this movie, I would say it hit you left and right, joke after joke, and that's what I liked the most. It focused mainly on the comradery of this group. What sells the first Guardians of the Galaxy for me is the chemistry between the group, and the back-and-forth they all have. The way Gunn writes these characters, and how he layers the dialogue to create a perfect symphony is incredible. And we got that for the first third of this movie. Then, the characters split up. While what each of them were doing was interesting enough, that comradery and that chemistry was missing. It left a hole in the movie, and the static energy of go go go came to a halt. I don't think these characters are compelling enough on their own. If we ever got a Drax (Dave Bautista) or a Gamora (Zoe Saldana) spin-off film, I don't think it would work. Even Star-Lord. It's when they're together, and they are playing off of each other, that's when they are incredibly compelling. But separating them in the manner that Vol. 2 did just froze the momentum.

Going back to the positives, it's visually incredible! I think that's one front that Vol. 2 surpasses the original on. The CGI, the colors, the costume design, the makeup work, the entire visual aesthetic is more impressive than the first one. I was sitting there in awe of what I was seeing before me. Especially in IMAX 3D. And the comedy is really spot on. Granted, not every joke lands. With Guardians of the Galaxy, I thought pretty much every joke landed, but that's not the case with Vol. 2. However, I think there are more jokes in Vol. 2, so it kind of balances itself out. All the performances were awesome as usual. Chris Pratt was great as Star-Lord, and actually had some really dramatic moments that hinted to me that he's more than just the action star funny guy. I hope we get to see more of that from him in the future. Zoe Saldana was good, although she didn't have a ton to do in the movie. They try to explore the dynamic between her and her sister, Nebula (Karen Gillan), but I don't think it hit home as hard as it should have. Dave Bautista almost stole the movie! He had some excellent scenes. And Bradley Cooper was great as always as Rocket. He is my favorite part of these movies by far. Vin Diesel was alright as Baby Groot, I guess. I think they just altered his voice to have a higher pitch, so it was kind of pointless to have him voice the character at that point. Michael Rooker surprisingly has the greatest character arc in the movie. They really expanded on his character from the first one, and that was one of the things they definitely improved upon in Vol. 2. And Kurt Russell was fantastic as Ego. 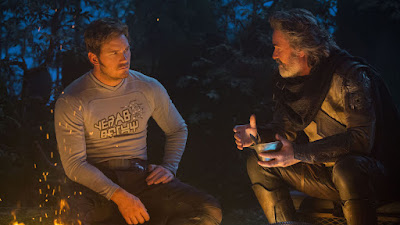 I think the biggest problem with Vol. 2 is that it has a really uneven story. The actual plot doesn't kick into gear until the third act, leaving much of the second act to move at a crawl, killing time until we can get going again. It kicks off with a bang, and it goes goes goes goes, and then runs out of steam by the second act. It rests for a bit (probably a good half hour) and then kicks it back into gear. So that resting period was really a drag, and it brought down the movie for me. It killed the momentum, and it was hard for the film to recover. As we went into the third act, and the true story was revealed, it seemed incredibly unnecessary and convoluted. While what we were seeing on screen was visually spectacular, I didn't know if it was necessarily the best direction to take the movie. I personally think the three-act structure of the first Guardians of the Galaxy was strong on all points. It did drag a bit in the middle, but it was for a short amount of time, and it recovered to give us a kickass third act. That doesn't happen with Vol. 2, unfortunately. I was still enjoying what I was watching, and having fun, but it wasn't nearly as strong as it could have been.

Ultimately, Guardians of the Galaxy Vol. 2 isn't as good as the original, but it is still a hell of a lot of fun. It's exhilarating and entertaining, and visually spectacular. Vol. 2 improves on the visuals, delivering better CGI, better makeup, better costume design, etc. The performances across the board are all really good, and Michael Rooker's character was actually improved upon in this movie. The comedy is all there too. Not every joke lands, but you get so many of them that it ends up evening out. However, the movie suffers when it splits up the characters, and the film grinds to a halt. With the team split up, the comradery and chemistry between them is no longer there, which is really the selling point of these movies. The second act drags for a while, and the movie doesn't fully recover going into the third act. It becomes a little too ridiculous and unnecessary, and it just feels like it could have been done better. The soundtrack in this one is also not nearly as good as in the first. It was fine for watching the movie, but it's not a soundtrack I would listen to on my own, like I have done with the original's for the three years since it came out. Overall, I had a really fun time in the theater with Vol. 2, but when compared to how incredible the first one was, it just doesn't really compare. 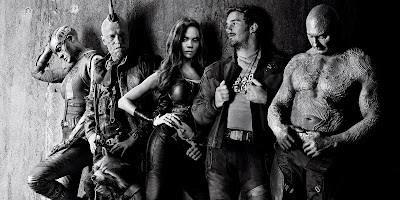 What do you think? Have you seen Guardians of the Galaxy Vol. 2? Did you like the film? Leave your thoughts in the comments section below.