It Comes at Night- Trailer 2

I've been mildly interested in It Comes at Night ever since I saw the first trailer. I wasn't even aware of the film until our other writer, Rob, made his list of "F*cking Kick Ass Weird Films", and It Comes at Night came in at number two. You can read Rob's full list here. Joel Edgerton is a fantastic actor. He did an excellent job directing and starring in The Gift, which really put him on the map for me. I had always liked him, but that movie really cemented him as an actor that immediately gets me excited for any project that he's in. However, he wasn't the best in last year's Loving. I didn't like the movie as a whole, and I specifically didn't think his performance was that good. However, that doesn't preclude me from getting excited for his future projects. And, in regards to It Comes at Night, he looks excellent in it. The film also looks incredibly creepy, which is something I prefer more than just straight horror. Horror has its place, but I personally prefer the crafting of a suspenseful atmosphere rather than just a string of pointless jump scares. I had actually completely forgotten that this film was coming out in just a couple of months, until the latest trailer dropped today.

I saw the first trailer a while ago, so I don't remember it as well, but this one was fantastic! I definitely got a 10 Cloverfield Lane vibe from it, especially in the beginning. Like I was saying before, this looks to be a lot more of a psychological thriller, rather than a slasher horror movie. It looks as if the focus of the film will be to get inside your head, rather than just to barrage you with jump scares. And, personally, I prefer that kind of movie more. I can't exactly tell what kind of movie it is, and I love that about this trailer. For a period of time, it looked like a contagion/zombie movie, and then it shifted more towards being a straight monster flick. But then it looked as if it could all be psychological, with no true creature as an antagonist. That is a great display of editing, if I can't even tell what kind of movie this is going to be. It just entices me all the more. The direction by Trey Edwards Shults looks fantastic. He's perfectly capturing a sense of claustrophobia, which I think will feed into the film excellently. The supporting cast, including Riley Keough and Kelvin Harrison Jr. also look great. While this film looked good before, it wasn't necessarily hugely on my radar. It now has certainly shot up with this trailer. I definitely have my eyes set on it now, and can't wait to see it when it hits theaters. 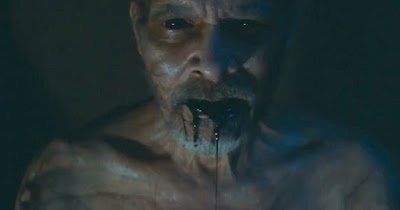 What do you think? Did you like the new trailer for It Comes at Night? Are you looking forward to seeing the film? Leave your thoughts in the comments section below.