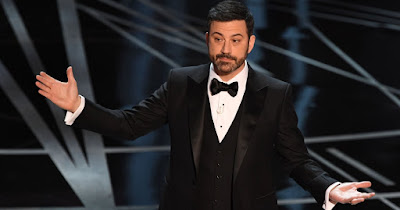 Over the past few years with the Academy Awards, there have been highs and lows in terms of the hosts. You'll have a great host like Chris Rock in 2016. But then you'll also have hosts like the pairing of James Franco and Anne Hathaway in 2011, which was an unmitigated disaster. However, in terms of this year's Oscar ceremony, I thought Jimmy Kimmel did a great job. He's a really great comedian, and does a fantastic job with his late night show. I was hesitant about him at first, simply because I prefer the biggest movie awards show of the year to actually be hosted by people in the movie industry. But Kimmel proved he was an outstanding choice, and crushed this year's show! So I ultimately walked away from the Oscars happy with how Kimmel did (and also upset over the La La Land/Moonlight fiasco). And now, just a couple months after the show, it has been announced that Jimmy Kimmel will officially be coming back to host the 2018 Academy Awards.

What immediately stands out to me about this is that it's been less than three months since the show, and they're already announcing Kimmel's return. That is a really quick turn around for the show. It's interesting to note that Kimmel was announced to do the 2017 Oscars in December of 2016, so for them to already be choosing and announcing him now for next year shows that they were really happy with his performance. And ultimately, I'm really happy about this. Like I said, I was very pleased with how Kimmel ran the show, and I thought he was the best host the Oscars have had in a while. Chris Rock was great, but he was more instrumental in handling the "Oscars So White" controversy, rather than just having fun and hosting a show. With Kimmel, we were able to just sit back and enjoy the show, which we haven't been able to do with the Oscars in a while. So it's great to see that the Academy recognized how good of a job Kimmel really did, and that they want him back. I think this is also the first time in a while that the Oscars have had the same host for two years in a row. Every year they've changed it up, whether bringing in someone new or bringing back someone who had hosted in the past. So having Kimmel host two years in a row shows that they really have confidence in him. Overall, I think this really bodes excellently for the Oscars, and I can't wait to see what Kimmel does with the show next year. 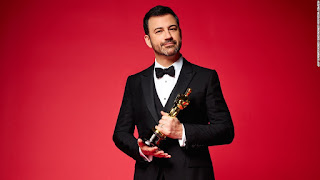 What do you think? Are you glad that Jimmy Kimmel will be returning to host the 2018 Academy Awards? Did you like what he did with this year's Oscars? Leave your thoughts in the comments section below.