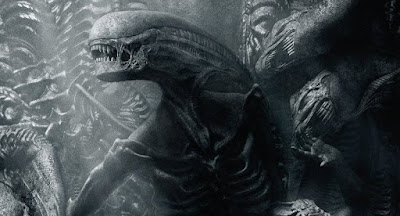 Alien: Covenant hit theaters this past weekend, and I walked in with really high expectations. I am a huge fan of the franchise, and couldn't wait to see Ridley Scott's latest entry into the series. I wasn't pleased with Prometheus as a whole. I thought it had good ideas and good elements, but it overall didn't come together as I had wanted it to. But with Alien: Covenant, I had a lot of faith that the franchise would return to the excellence it once had. However, Covenant wasn't as great of a movie as I wanted it to be. It's a decent film, and it is better than Prometheus, but it wasn't the mindblowingly awesome movie that I thought it frankly needed to be. In the days that have passed since I saw Covenant, I have been able to discern specifically what parts of the movie didn't work for me. And thus, I am releasing a new entry in my occasional editorial series where I break down my issues with a newly released film.

There will be spoilers for both Prometheus and Alien: Covenant in this article. If you have not seen the movie yet, then you can check out our spoiler-free review for Covenant here.

Underwhelming Nature of the Prometheus Revelation 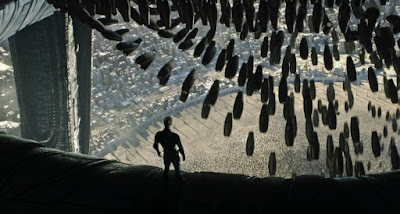 In the film, it is revealed that David (Michael Fassbender) is the ultimate creator of the Xenomorphs. After seeing the weakness of his own creator, Peter Weyland (Guy Pearce), at the end of Prometheus, David sets out to eradicate humanity. To do so, he does the one thing he was never supposed to do as a synthetic: create. Through biological testing, David is able to mold the Xenomorphs into being the ultimate killing machine in order to destroy humanity. David first unleashes them on the Engineers' home world, wiping out the entire planet. And, at the very end of Covenant, David leaves with the 2,000+ colonists on board, as well as facehugger embryos. There is a poetic nature to David's quest, and the film (in tandem with Prometheus) does a really good job of allowing us to understand his motivation. However, this is really the only true connection between Prometheus and Covenant, and the film suffers from that disconnect.

While Prometheus wasn't the best movie, I was attached to the characters of Elizabeth Shaw (Noomi Rapace) and David. The movie ends with them journeying towards the Engineers' home planet, in order to find out why they created humanity, as depicted in the opening sequence of Prometheus. That movie spent most of its time setting up and developing the Engineers, and part of what I wanted from a sequel was resolution. However, we enter Covenant realizing that not only is Shaw dead, but the race of people we spent the entire last film setting up has been wiped out. You can relate this to the set-up and switch of Alien 3. Aliens got us hooked on the characters of Newt (Carrie Henn) and Hicks (Michael Biehn), and ended on a positive note. Then Alien 3 opened to them being killed off in the first five minutes. It kind of kills the momentum of the series, in both cases. I think after the backlash to Prometheus, Fox forced Scott to abandon his original plan for Prometheus 2, and make it more centered around the Xenomorphs, which makes sense. But the way that Covenant handled addressing the questions left by Prometheus just did not feel satisfying. Killing the characters you spent an entire film developing just does not work, and it ultimately leaves a lot of questions unanswered.

Retread of What We've Seen Before 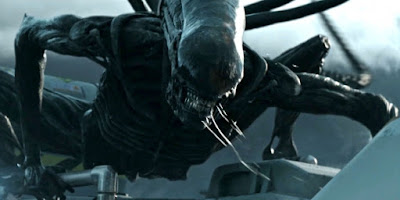 When David finally births the first true Xenomorph (after the death of the Neomorph), the third act involves the remaining crew of the Covenant trying to escape the planet, while the Xenomorph is chasing them. Sound familiar? The problem is that this entire sequence is not only brief, but it's exactly what we've seen before. There's nothing different about the Xenomorph chasing the crew members in Covenant than when it happened in Alien. Or Aliens. Or even the Engineer chasing the crew in Prometheus. The idea of a ship getting a distress call and landing on a planet to be attacked by the aliens has been done in essentially every single Alien movie. Covenant needed to change things up. It needed to add more to the mythology, clarify questions left by Prometheus, and connect to the original Alien. Instead, it adopted the exact same formula as the previous movies, skirted over imperative parts of Prometheus, and reduced the final fifteen minutes to a condensed version of the original film's third act.

I said this in my review and I'll state it again, but Alien: Covenant needed to be big and bold. It needed to shake things up, and be a great bridge between Prometheus and Alien. This movie really needed to change the game, in terms of the franchise. People will say that it didn't have to do that, but it did. Covenant couldn't be just a run-of-the-mill, cookie cutter story, which it ultimately was. It needed to be far more profound, and really hook us all back in. If Prometheus wasn't as divisive as it was, then a movie like this would be fine. But Covenant needed to assure fans that what was introduced in Prometheus mattered to the world of Alien, and it just didn't do that. Instead, it addressed a very narrow sliver of Prometheus, and left a lot of things hanging that will most likely never get answered. And then when it did introduce the Xenomorph, it was simply a retread of what we've seen in all of the other movies. Where Covenant needed to be bold and defiant, it played it safe. And that was a mistake.

Use of CGI over Practical Effects 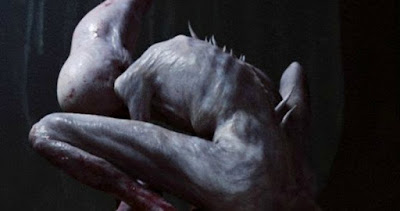 This last issue may seem like it is overly insignificant, but I will defend why it ultimately hampered the experience of watching this film. One of the most defining aspects of Prometheus was its use of practical effects. Everything that could be done practical was done practical. All of the creatures, the props, the sets... it was all practical. And this allowed for one to be totally immersed into this world. It was the story that kept the film from being great, but all the visual components, specifically the use of practical effects, is one of the reasons why that movie isn't complete garbage. If you watch the behind-the-scenes featurettes on Prometheus, Scott goes into great detail as to why practical effects were necessary over CGI. It was something that was important and vital to the movie. However, with Covenant, there is a lot more CGI. All of the creatures, including the Neomorphs and Xenomorph, are CGI, not practical.

You may be thinking "So what? Why does this matter?" It's because the practical effects for the Xenomorph in Alien and Aliens frankly looked better than the CGI for the alien in Covenant. If CGI can improve your film, then by all means use it. Having Andy Serkis in a monkey suit for the new Planet of the Apes movies would not have worked; you needed it to be CGI. But, with Covenant, having CGI aliens did not work as well as having practical aliens would have been. The problem is that the noticeable CGI creates a disconnect. When it's strikingly obvious that these aliens don't look real, then it's hard to buy into the horror of what's happening. The practical effects in the original films, and even Prometheus, allowed you to buy into the terror. It was even more horrifying because it actually looked real and tangible. Having a giant CGI monster chase around a bunch of characters that aren't developed does not evoke fear. First of all, a better story was needed to flesh these characters out more so that we could care about them, but using practical effects would have also helped in hooking the audience. There is one quick shot, specifically of the Xenomorph's head during the shower scene, that was practical, and it looked terrifying! This made all the other CGI shots of the alien all the more noticeable. 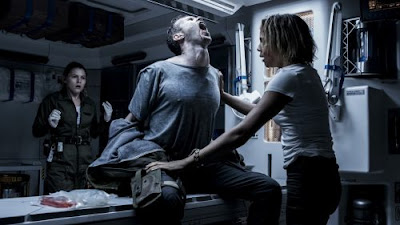 I don't like to just rip a film to shreds, especially when it doesn't deserve such heavy scrutiny. There are a lot of good things in Alien: Covenant. I thought the film looked beautiful. All of the cinematography and the production design looked great. It certainly carried over its care for visual detail from Prometheus. I also liked the new additions to the mythology, such as the backbursters and the Neomorphs. It was creative and different, and I really liked it. I also did like the idea of David ultimately creating the Xenomorphs. I wish Covenant had answered more of the questions asked by Prometheus, but I thought that specific revelation was an interesting one. There were also a lot of thought-provoking scenes, such as when David is showing Walter how to play the flute, that deepened the philosophy behind David's anger for humanity, and gave greater understanding to his cause. The fleshing out of David's motivation was key, and I think Covenant did a great job of exploring it, and showing us why it mattered.

Overall, Alien: Covenant is not a terrible film by any stretch of the imagination. It is better than Prometheus, in my opinion. It does a much better job of telling a coherent story. However, there are a couple of key problems that keep Covenant from being what I ultimately wanted it to be. It strayed away from Prometheus, and elected not to answer a lot of the questions posed by that movie. There needed to be more closure, to connect Prometheus to Alien, and Covenant just didn't do that. By killing Elizabeth Shaw and the Engineers off in the way that they did, they essentially undid all the set-up and development that happened in Prometheus. In terms of the Alien component of Covenant, it was simply a retread of what we've seen before. The format of a ship receiving a distress call and going to the planet has been done in virtually all of the films, and the third act of Covenant was essentially a condensed version of the third act of Alien. Where Covenant needed to take a stand and be something different for the franchise, it fell back on the same old stuff. Lastly, Ridley Scott's decision to use CGI for the aliens instead of practical effects was a mistake, because the practical effects simply looked better. The use of CGI also kept you from being immersed in the film, as the noticeable visual effects constantly caught your eye. In the end, Covenant is not the worst movie in the franchise, but it's glaring, inherent errors keep it from being as great as it should have been. 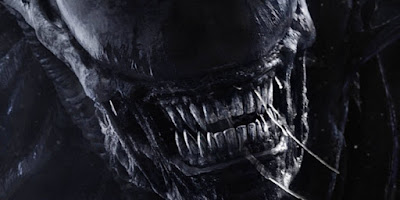 What do you think? Do you agree with my problems with Alien: Covenant? Did you like the film? What were some of the problems you had with it? What were the things you liked about it? Leave your thoughts in the comments section below.