I have been against The Emoji Movie ever since it was first announced. How the f*ck do you make a movie about the little pictures you text to people? Not only was it just an overall stupid idea, but it was being made purely just to make money. Granted, all movies are made to make money, but they usually have some sort of artistic angle. This just sounds like a pile of sh*t the studio hopes will make a profit. You can read more of my tirade in our Summer Blockbuster Preview here. So I've never been on board with this movie. They put out a tiny teaser trailer that didn't really show us anything. It was one joke, and I didn't think it was funny. Basically, it wasn't enough to give us a full sense of what this movie was going to be. So when I saw that the full trailer for The Emoji Movie had dropped today, I was a little bit intrigued. I was more interested in seeing just how bad it would be. So I watched the trailer, and I have some pretty strong feelings about it.

Bare with me on this, but when I watched it, I was surprised by how fleshed out the story was. I was watching it, thinking "Wow, this actually has a decent story. It looks like there could be a good emotional undertone about expressing emotions, as well as some good world building..." then I stopped myself and realized I was literally describing Inside Out. Everything in this trailer points to it being an Inside Out rip-off. It has all the same themes, the same ideas, even the same shots of the child in the classroom being affected by the journey of the emotions. I mean, the connection is undeniable. This really infuriates me. Countless hardworking people at Pixar spent years making Inside Out, and then the f*cking Emoji Movie comes along and steals all of that for a quick buck! This f*cking movie was too goddamn lazy to come up with its own story and idea, so they steal someone else's! The Emoji Movie will only be a shell of how great and impactful Inside Out was. Inside Out's originality shined, and I hope people will recognize that The Emoji Movie is simply trying to make a profit off the back of hardworking people. 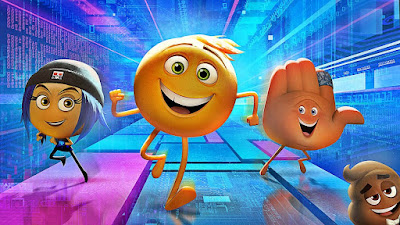 What do you think? Did you like the new trailer for The Emoji Movie? Are you looking forward to seeing the film? Leave your thoughts in the comments section below.