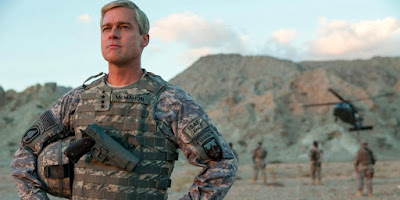 Since Netflix has completely dominated television with runaway hits like House of Cards and Stranger Things, they have since been turning their attention to movies. They just dropped close to $200 million dollars to make Martin Scorsese's next film, The Irishman. So you could say that they're pretty serious about making a dent in the film industry. Their first real release was Beasts of No Nation in 2015, which I rather liked. It wasn't fantastic, but it was a really good movie with a great performance by Idris Elba. There was even some serious talk about him gerting an Oscar nomination, but that didn't end up happening. In regards to this year, they have a whole bunch of original movies coming out, and it's going to be the real test as to whether Netflix will actually be a significant player in the movie industry. Last month saw the release of The Discovery, which I was really excited for. Unfortunately, it didn't turn out to be very good. You can read our full review for that one here. Today, their next film, War Machine, dropped online, and this was one I had my eye on. It stars Brad Pitt, and it seemed like it could be a really interesting look into United States' involvement in the Afghanistan War. But with the flop of The Discovery, I was really hoping that this movie could turn it around for Netflix. However, War Machine, unfortunately, isn't very good either.

General Glen McMahon (Pitt) is at the top of the military force in Afghanistan, trying to win the war while President Barack Obama is slowly taking troops out of the country. 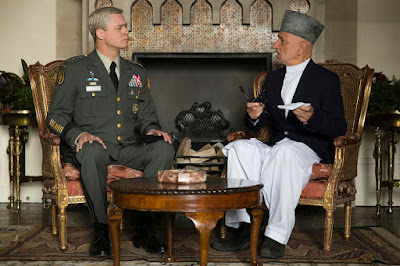 Similar to The Discovery, I think this movie had a lot of good and interesting ideas. It just didn't execute them well at all. The film is narrated by Scoot McNairy, and he says a lot of introspective things that could have made for a fascinating look at the psyche of a war general when the war is waning. That's a great idea, and one that could have made for a really compelling movie. Unfortunately, all War Machine does is tell us these things, without ever showing it to us. There is no clear, discernible story. It simply follows General McMahon around to a lot of different places. So it's hard to latch onto where the film was headed, or what the overall point actually was. Speaking of McMahon, Brad Pitt seriously overacts in this movie. He felt like a caricature, from the voice to the facial expressions. There was nothing natural or realistic about it, and it just felt like a cartoon character. Because of this, I could never see McMahon as a real, genuine character. I was just watching Brad Pitt doing a poor job on screen. I'm not sure exactly whose fault that was. The voice and the ticks could have been Pitt's ideas, but it also could have been all the director's, David Michôd. Regardless of whose ideas they were, it simply came across as ridiculous. An unbelievable main character, coupled with the lack of a clear story, made it incredibly hard to get into the movie.

There are a lot of random moments of spontaneous comedy, or at least what is supposed to be comedy. The problem is that it doesn't really fit. After a conversation, the camera will linger on someone who is trying to get the cap off a pen, or a cringe-worthy back-and-forth about one guy cutting off another guy in a conversation. Things like that. They're not exactly funny, and they don't serve a purpose to the scene or to the "story". They're just there. It feels like the kind of thing that would be in a spoof movie... although this isn't a spoof movie. And it happens in pretty much every single scene. If it were just a couple times, I could excuse it as the writer (Michôd) just not knowing how to end the scene, but it happens so often that all your attention is drawn to it. I think the writer may have wanted to establish a more light-hearted tone, and this was his idea of doing that. But it just doesn't work, and it makes for really awkward moments that have no real value or meaning. The movie's first ten or so minutes is devoted to introducing us to McMahon's team, but they don't do much in the movie. They're simply there for a one-liner, or as a plot device to get McMahon some sort of information. It just felt wasted. Look, I don't really have a lot of positives about this movie. The editing is fine. I think the story is more of the problem with the movie than the technical elements are. I mean, it doesn't have breathtaking cinematography or anything like that, but it's at least visually competent. And, as I said before, it had good ideas somewhere in there. It just never realized them in the way that it should have. 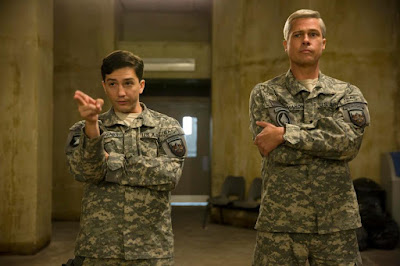 Overall, War Machine is a major step back for Netflix. I thought they hit a low point with The Discovery, but this is worse. I think it's similar to last year with DC for me. Batman v. Superman: Dawn of Justice came out, and I had a lot of problems with it, but there were also good parts about it. I thought it couldn't get lower than that, but then Suicide Squad came out and it was horrendous. Now, I don't think War Machine is nearly as terrible of a film as Suicide Squad, but there's not a lot of redeeming qualities about it. Brad Pitt overacts as General McMahon, and you can't take the character seriously. He just comes across as a cartoon character. The story is not clear at all. The narration introduces a lot of interesting ideas that could've made for a fascinating movie, but this film doesn't follow through on any of those ideas. There is also an abundance of stupid comedic moments that ultimately holds no value. It feels like something out of a spoof movie. Sure, the film is visually competent. The shots are framed okay, and the editing is adequate. The score isn't abysmal. But when the story and characters don't work, it's hard for the movie as a whole to be good. 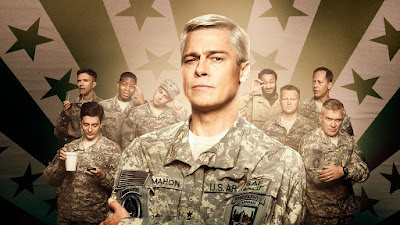 What do you think? Have you seen War Machine? Did you like the film? Leave your (spoiler-free) thoughts in the comments section below.