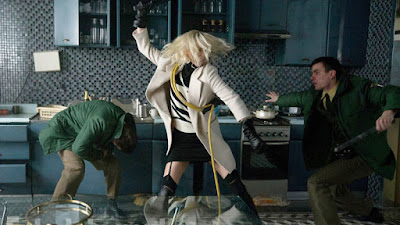 I've been on board with this movie ever since I saw the first trailer. What caught my eye immediately was how well choreographed the action sequences were. It was very John Wick-esque, which makes sense, since the director of Atomic Blonde, David Leitch, had co-directed the first John Wick with Chad Stahleski. While I really dug the trailer, I was afraid that Atomic Blonde would be too much like John Wick. That the overall style of the film, and its action sequences, would be too similar, and thus making Charlize Theron merely a female John Wick, as opposed to her being her own character. Another thing I was watching this movie closely for was the direction. Leitch is helming next year's Deadpool 2, and I wasn't sold on him entirely as a director yet. Sure, he did a great job co-directing John Wick, but I wasn't sure exactly how competent he was at directing on his own. So, going into an advanced screening for Atomic Blonde, those were the two things I was mainly looking for: how good of a stand-alone director David Leitch was, and whether this film would ultimately be too much like John Wick. Luckily, I was impressed on both fronts. Leitch does a fantastic job directing this movie, and it's ultimately nothing like John Wick. Atomic Blonde is a great action movie that excels due to its technical brilliance and fantastic performances, even if the story itself isn't as fleshed out as it should have been.

Undercover MI6 agent Lorraine Broughton (Theron) is sent to Berlin in the midst of the Cold War in order to obtain a missing list of double agents. 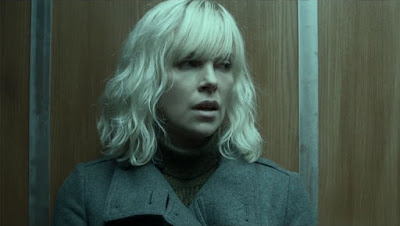 What stands out most about Atomic Blonde is just how well made it is. The technical aspects are far above average for a simple action movie. The cinematography is beautiful. There is great use of rule of thirds, creating gorgeous on screen compilations. The editing works hand-in-hand with this, making for really spectacular transitions that only enhance the overall film. David Leitch does a brilliant job directing. Just in terms of the style and the atmosphere of the movie, he really nails a strong position, and never lets go of it. This world that's created feels like the real world, and yet it also feels enhanced and ultra-real, which just makes it all the more interesting to watch. The soundtrack and the score worked in tandem with all the other visual elements in order to really draw out the atmosphere, and to make it this pulsing and vibrating world of darkness and badassery. Leitch certainly brings his stuntman know-how to this film, creating elegant long shots, paired with expertly rehearsed choreography. The action doesn't feel like John Wick at all, but the technicality in terms of how they filmed it is the same. Long shots using the real actor instead of a stunt double, resulting in excellent action sequences. How it's filmed is similar to John Wick, but it never felt like it was just a rehash of what we've seen before. Within seconds of watching this movie, I realized we weren't going to just get the "female John Wick". Lorraine Broughton is by far her own character, and I would say she is even more badass than John Wick. I think that's mainly attributed to Leitch's skill as a director, and how capable Charlize Theron is as an actress.

Also under Leitch's jurisdiction were the performances. The cast across the board was really good, but Charlize Theron and James McAvoy really stood out. Theron obviously plays the cold, calculating badass, while McAvoy goes for the more psychotic, manic killer. They play well off of each other, each with their own clear and distinct personalities. Toby Jones and John Goodman were also good in their roles, but their characters' screen times were so minimal that really anyone could have played them. There was no true shining moment for either of these actors in terms of their performances, just due to the lacking nature of their characters. But this was ultimately fine, as it meant we got more screen time with Theron and McAvoy. We got a lot more of McAvoy in this film than I had originally thought from seeing the trailers. He really is a co-lead to Theron in many regards, but at the same time, the film never loses sight of it being Theron's story, and Theron's movie. Sofia Boutella's role in this movie really works, though it is small. I wish we had gotten a little more of her character, just because of how intriguing she was. But she did ultimately serve her purpose. Boutella has proven herself to be very adept at physical performances, such as with Kingsman: The Secret Service or The Mummy, but I've never been blown away by her on a pure acting standpoint. Here, though her screen time is minimal, she shows that she actually has some range. Watching Boutella in Atomic Blonde gave me hope that she could have some staying power in the industry, and maybe that's why I was hungry for more of her in this film. 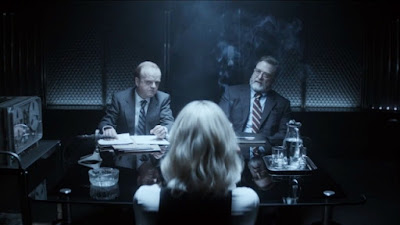 What keeps Atomic Blonde from being an utterly brilliant film is the underdevelopment of the story. While all the technical elements shined, while the performances were spectacular, and while the action sequences were expertly crafted, the story wasn't as fleshed out as I would have liked. It introduces a lot of elements--crucial plot points, McGuffins, pivotal characters--and yet doesn't do as good of a job balancing all of these elements. The story thread connecting all of these excellent scenes wasn't as strong as it could have been. Things could have been a little more clear, and a little more concise. The overall narrative could have been better developed and more fleshed out, in order to help us better connect to Theron's mission. With John Wick, I knew exactly what motivated Wick, and why he was doing what he was doing. I felt his raw drive, and thus I was more connected to what was going on. Here, it was explained why Theron was doing what she was doing, but I never truly felt it. It didn't radiate from the screen. If the story had a bit more development, if we felt more of Theron's drive, if all the story elements were balanced just a bit more, then I think that this could have become something truly special. It still remains as a great film, and one of my favorites of the year right now. But if the story had been tweaked a bit, then it certainly would have elevated the movie as a whole.

Overall, Atomic Blonde is a cold, cruel, badass movie, led by a strong and chilling performance from Charlize Theron. She cements herself as one of the best action heroines in the film industry today, and shows just exactly what it is she can do. James McAvoy is in the film a lot more than I thought he would be, and he delivers just as he always does. Their characters were radically different from each other, thus leading to an interesting dynamic. Toby Jones, John Goodman, and especially Sofia Boutella were good in their roles, even if their screen time was minimized in order to give more room for Theron and McAvoy. The technical aspects of the movie are all fantastic. The cinematography, the editing, the action choreography, the soundtrack, the color grading-- it all works together to bring out a visceral, cinematic atmosphere, one that really defines the film. David Leitch also proves himself to be a very competent director, and now I really have no worries about his helming Deadpool 2. What keeps Atomic Blonde back from being perfect is its slightly underdeveloped story. Had the story elements been a bit better balanced, then this would have been something truly special. In the end, Atomic Blonde is great, and seemingly comes out of nowhere. I really hope people go out and see this movie, because action films made to this level of quality deserve our praise and attention. 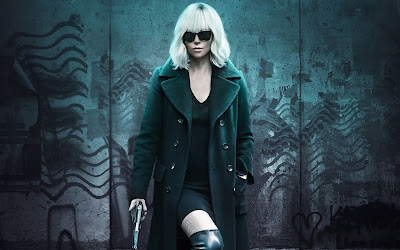 What do you think? Are you looking forward to seeing Atomic Blonde? Leave your (spoiler-free) thoughts in the comments section below.