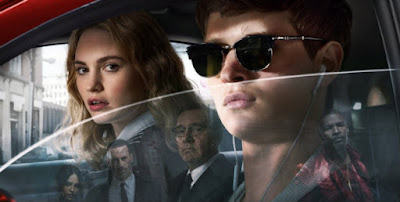 I've been looking forward to seeing Baby Driver for sometime now. After Edgar Wright was kicked off of Ant-Man (and for the better), I've been interested in seeing his next movie. And when I first heard about and saw the trailers for Baby Driver, I was immediately hooked! They promised us a high-adrenaline thrill ride that expertly crafted the film to coincide with its soundtrack. It just looked incredible. And I love all the actors in it. Kevin Spacey is one of the best actors working today. He is just fantastic. Jamie Foxx, Jon Hamm, and Jon Bernthal are also great actors. I haven't seen Ansel Elgort or Lily James in a ton of stuff, but they looked decent enough from the trailers. And I've heard nonstop praise for this movie. Every critic I read and respect is saying this is one of the best of the year, and it currently has a 100% on Rotten Tomatoes. So when I saw there was an opportunity to see this a couple weeks early at an advanced screening, I sure as hell took it! I tried to check my anticipation, because I've been disappointed by a lot of movies this year. I haven't come out of the theater loving a movie since Logan, and I was afraid I wasn't going to love this movie as much as I wanted to. Luckily, I was wrong. I have to see it again (and I definitely will), but Baby Driver may just be my favorite movie of the year so far!

Baby (Elgort) has one last job to do before he has finished his debt to Doc (Spacey), but things get complicated when he meets a girl (James). 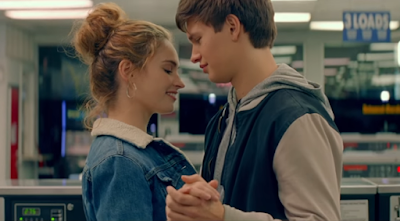 Let me cut to the chase: this movie is awesome! Pure and simple. Edgar Wright is a f*cking genius. What he is able to do in crafting this movie is just mindblowing. It is so slick and razor sharp, that I had a hard time thinking about just how much work actually went into the production design, the editing, the cinematography, the sound editing, and the direction in order to have everything run as smoothly as it did. I'd say there is music playing for about 75% of this movie, and it isn't just some random pop songs playing in the background. The movie is entirely constructed around its soundtrack. Every frame, every shot, and every action happens to perfectly coincide with the music. And it's edited to a T! It is stylized in the best way, and it just comes across as a beautiful orchestra of visual awesomeness. If you look in the background, you can see graffiti on the buildings that has some of the song lyrics, and its timed that you hear it in the song as Baby walks past this graffiti. That's the level of care and attention that went into every shot of this movie, and I was blown away by it. There were elegant long shots that you could tell were endless rehearsed and prepped in order to flow seamlessly with the music. There are few movies where I genuinely don't know how they did or pulled something off, and this is one of those movies. I wasn't prepared for how much humor there is in this film. It is so f*cking funny, the entire theater was dying laughing throughout the entire movie. And I'm sure these jokes will hold up through multiple viewings.

The performances in this movie are insane. Ansel Elgort was really good, but I think the supporting cast outshined him a bit. Jamie Foxx turns in one of the best performances he's ever given. He was hilarious and frightening at the exact same time. I was laughing at his jokes one minute, and then was sh*tting myself the next. He commanded the screen every second he was on, and was the best part of the movie. Jon Hamm was also fantastic. They take his character in an unexpected direction, and it works beautifully. He really rises to the occasion, and shows us the range has has as an actor. Kevin Spacey was also great. He plays his character so effortlessly that you can forget just how good he actually is. Lily James was wonderful in this movie as well! I think the only other thing I've seen her in was Pride and Prejudice and Zombies, which wasn't really the best movie to judge her acting capabilities. But she and Elgort had fantastic chemistry in this movie, and I completely bought into them as a couple. The action in this movie is also phenomenal. Edgar Wright directs the sh*t out of it, pulling off elegant car chases and brilliant gun fights. Watching some of these scenes made me really wish we had seen his Ant-Man movie, but if him doing that meant we couldn't get this movie, then I'm certainly glad things worked out the way that they did. 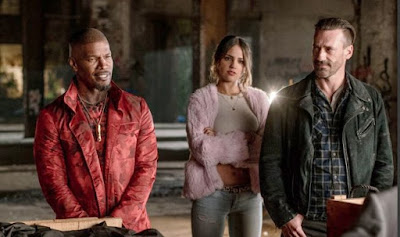 I had very few problems with this movie. I don't think the second act was as sharp as the first and third act, but it was still incredibly entertaining. I just think the first and third acts were absolutely riveting, and the second act didn't grip me as much. The movie slows down a bit, and I found myself not quite as engaged. But that's not to say that I didn't like the second act. It just wasn't as good as the outstanding first and third acts. I also thought Baby and Deborah's relationship felt a little rushed. Elgort and James had excellent chemistry, and I bought into them as a couple. But the lengths their relationship goes to by the end of the movie didn't feel entirely plausible. I think it needed a bit more development before it could go to those lengths. Jon Bernthal is great in this movie, but he's barely in it. He has only a couple of scenes, and that was disappointing. I love him as an actor, and I wish he was in it a bit more. But the movie was so good that I wouldn't really want him jammed into more of the film, since it was so great the way it was. Really, that's it for complaints. This movie is awesome, and my problems with it are really only nitpicky things.

Overall, Baby Driver is definitely one of the best of the year, if not the best of the year. The direction is fantastic! Edgar Wright does a brilliant and meticulous job, making sure every little thing is done right. This has some of the best editing, cinematography, and sound design of the year, as they all had to work in tandem with the music. And it's done in spades! The performances across the board are beyond excellent. Kevin Spacey, Jon Hamm, Ansel Elgort, and Lily James are all fantastic, but Jamie Foxx absolutely steals the entire movie, giving one of the best performances of his career! The action is so well done and so well crafted that it rivals any comic book movie. I do, however, think the second act wasn't as good as the first and third acts. And Baby and Deborah's relationship, while Elgort and James' chemistry was fantastic, needed a bit more development. It goes to a bit of an implausible length by the end that I didn't exactly buy into. But in the end, Baby Driver is a hilarious, adrenaline-filled thrill ride that rarely lets go of its grip on you. It is a shining gem in the (so far) disappointing year of 2017, and it will be hard-pressed to not make it into at least my top five of the year by the end of it. 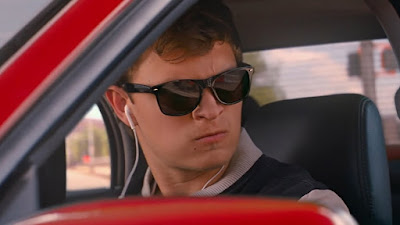 What do you think? Are you looking forward to seeing Baby Driver? Leave your (spoiler-free) thoughts in the comments section below.