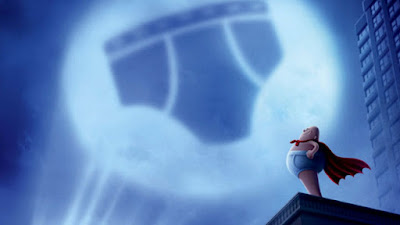 As a kid, I used to love reading the Captain Underpants books. They were funny and entertaining, and contained the perfect kind of humor for a five year old. There wasn't a whole lot of substance to them, but they were a fun read. So when I heard they were making an animated movie based on the books, I was interested in how it would turn out. However, I wasn't exactly clamoring for a movie. I certainly thought that animation was the best route for the film, but I wasn't super interested in actually seeing it. But after I watched the trailer, I saw how faithful the movie was actually being towards the books. For a more obscure property as Captain Underpants (it's not Harry Potter, or something universally recognizable), I was impressed with the level of care being taken to honor the books. And that kind of faithfulness is what ultimately got me to go see this movie. Captain Underpants' strongest suite is how faithful it is to the books, and it is a fun and enjoyable movie. However, it's surface-level story stops it from becoming anything more than just a throwaway film.

After years of battling with their principal, George (Kevin Hart) and Harold (Thomas Middleditch) hypnotize Mr. Krupp (Ed Helms) into believing that he is actually the costumed avenger from their homemade comic books: Captain Underpants! 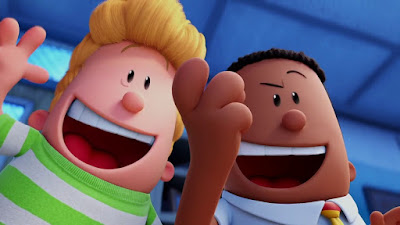 Let me get this first thing out of the way: this is a really, really stupid movie. If you're looking for a concrete story, well-developed characters, and thought-provoking messages, then you shouldn't be going to see a movie called "Captain Underpants". Is the movie fun and entertaining? Yes, it is. But is it actually a good movie? No, it's not. It does have some good qualities. I thought they did a very good job with the voice casting. I wasn't sure how it would be having grown men in their forties voicing kids in the first grade, but it worked. If they had actually used real kids for the characters of George and Harold, I think it would be have felt weird. This felt right, and I thought Kevin Hart and Thomas Middleditch were really good. I also thought Ed Helms was great as Mr. Krupp/Captain Underpants. I really like him as an actor, and I thought he embodied the character very well. Jordan Peele and Nick Kroll were also really good in their respective roles as Melvin and Professor Poopypants. The movie's animation replicates the art from the books, and I really appreciated that. The film also features a multitude of other kinds of animation, and its innate creativity was surprising. It's hard to explain in a review; you just have to see it for yourself.

One of the movie's strongest aspects was how well it captured the spirit of the books. I had waves of nostalgia throughout the entire film, and I thought it was an excellent representation of how silly and fun those books were. I enjoyed all the little homages and Easter Eggs from the books, and I think it definitely enhanced my viewing experience. I don't know if someone who hadn't read any of the books would have liked this movie. They might just see a dumb movie that relies solely on bathroom humor. But as a person who read the books growing up, it was incredibly faithful, and that was satisfying in of itself. I think that in turn can become a negative, because I don't believe this movie is very accessible to new fans. People might watch this and think it's absolute garbage, but that's because they don't appreciate where it's coming from. But a movie's responsibility is to be able to stand on its own, and I think Captain Underpants fails to do that. In order to appreciate this movie you have to know the books, and that shouldn't be the case. While you are getting a movie that is called "Captain Underpants", I wish there was a little more to the story than just what was on the surface. Sure, the books don't have any kind of real message or meaning; they're just entertainment. But when you have an animated movie, what separates the exceptional from the bland is depth. Captain Underpants could have had meaningful undertones that would have elevated it into becoming something quite special, instead of being (though enjoyable) ultimately expendable. 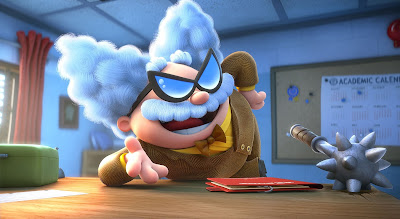 Overall, Captain Underpants: The First Epic Movie is fun and enjoyable movie for fans of the books. People who are not familiar with the source material probably won't appreciate it, and may just see it as pointless trash. This is an incredibly stupid movie, but was made fun by its nostalgia factor. The voice cast is really good. I wasn't sure how Kevin Hart and Thomas Middleditch would be, voicing first graders, but it made sense within the context of the film. Ed Helms, Jordan Peele, and Nick Kroll were also really good. The movie utilizes a few different kinds of animation, which took me by surprise. But I was pleased with how well executed these elements were. This movie's strongest suit is how faithfully it adapted the books. It did a great job in that regard, and I really appreciated it. However, I don't know if this movie would necessarily appeal to people outside of the fan base. I also thought there was a missed opportunity to make this more than just a surface-level movie, but the filmmakers didn't exactly capitalize on that. In the end, Captain Underpants is entertaining for fans of the books, but it's not a movie I would ever watch again. 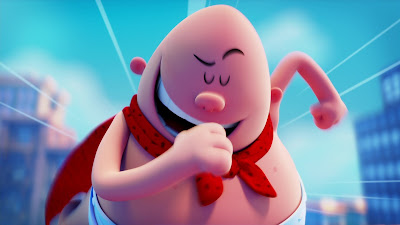 What do you think? Have you seen Captain Underpants: The First Epic Movie? Did you like the film? Leave your (spoiler-free) thoughts in the comments section below.