First Trailer for Murder on the Orient Express

Ever since I first heard about the film, I've been interested in seeing Murder on the Orient Express. It's directed by Kenneth Branagh, who is a great director. And it has one of the best casts of the year. I've said forever that Beauty and the Beast held that title but, in retrospect, I think this may usurp it. You have Johnny Depp, Daisy Ridley, Willem Dafoe, Judi Dench, Penélope Cruz, Michelle Pfeiffer, Josh Gad, and of course Branagh himself. That cast is absolutely stacked! And it has a great premise. There's a murder on a train, and everyone is a suspect. It could make for a really thrilling mystery, if in the right hands. And Branagh has certainly proven himself to be a very capable director. Up until an Entertainment Weekly scoop, we hadn't heard any new developments on the movie. The pictures EW showcased were fine, but it was nothing to really get excited about. The looks of the characters, especially in terms of facial hair, was really reminiscent of The Hateful Eight, in a good way. This movie has a lot of potential, and I've been excited to see a trailer for some time. And now we have one.

I really liked this trailer a lot. Granted, it was only a teaser. But I think it did its job in getting people excited about the film. First of all, the cinematography is gorgeous. There's great use of the rule of thirds, and its visual aesthetics just look great. I also loved the whole sequence of the camera panning throughout the entire train, giving the titles of all the suspects. Again, it was very Hateful Eight-esque. The trailer's stylized nature made it fun and exciting, and I hope that carries through into the movie. This trailer also did a fantastic job establishing a sense of paranoia. You have no idea who actually committed the murder. Sure, the trailer seems to point to Johnny Depp at first, but the studio is smart enough to not reveal the actual murderer. It's a misdirection, and that's something I hope this movie has a lot of. I want this movie to take me for a ride, no pun intended. I want to question everyone. This trailer did a great job of establishing that kind of atmosphere, and I hope the actual film continues with it. The cast looks great. I don't know if this is the kind of movie that will garner Oscar buzz, but it is coming out in November. Regardless, I think we are going to get a great mystery, some really good performance, fantastic visuals, and, hopefully, a really fun and exciting movie! 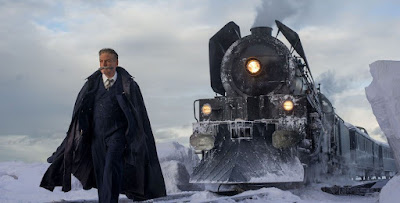 What do you think? Did you like the first trailer for Murder on the Orient Express? Are you looking forward to seeing the film? Leave your thoughts in the comments section below.