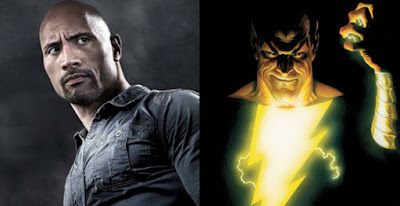 All the way back in 2014, Dwayne Johnson announced to the world that he would be playing the anti-hero Black Adam in DC's upcoming Shazam movie, a film still without an official release date. The announcement came after months of him teasing the reveal. But since the 2014 announcement, not much has happened. DC movies have come and gone. Batman v. Superman: Dawn of Justice and Suicide Squad flopped critically, while Wonder Woman soared past expectations. And with DC announcing literally dozens of new films, there has still been no new news on Shazam. Since 2014, all we have heard is that Johnson's character would be getting a spin-off film, and that Lights Out and Annabelle: Creation director David F. Sandberg was in consideration to direct. And in three years, that's all we have heard. Johnson has been attached all this time, and we still don't know who is even playing Shazam. As we head into San Diego Comic Con week, DC has been teasing that they'll make some big reveals. It seemed likely that Shazam could be one of those reveals. Maybe they'd announce who was playing the hero? Maybe they'll confirm Sandberg, and give us a release date? It seemed likely that Shazam would be a film DC would want to get the ball rolling with sooner rather than later, considering Johnson's incredibly busy schedule. However, perhaps that's no longer the case. It is being reported that Johnson's Black Adam won't appear in the Shazam movie at all, bringing to question whether Johnson is still attached to even play the character.

Things seemed to have been going well with DC. Wonder Woman was a huge success. After weeks of terrible news coming out of The Batman, things finally seem to be stable there. There had been no monumental f*ck-ups for a while. Then this f*cking sh*t happened. Keep in mind, it's still only reports. Nothing has been confirmed by Johnson or DC, so this could very well could not be true. But it's being reported by people working for The Wrap and Variety, so I'm leaning towards that it's true. Johnson is one of the most sought after actors, and one of the biggest movie stars, working today. He brings his A-game to every movie he's in, regardless of if it's good or not. He is a person that DC needs on their team, and it was incredibly smart of them to snatch him up as early as they did. But we've been waiting three years now to see Johnson involved in the DC Cinematic Universe, and now he won't be in Shazam? Not just that, but there's a solid chance he's no longer even playing the character? This is just ridiculous. I thought DC finally had their sh*t straight, but if this is true, then I guess I was wrong. DC, listen to me: you need Dwayne Johnson. He is a powerhouse, not just in terms of what he brings to the screen, but also with how he markets his movies. He is someone you want on your side. And this really doesn't look good for anyone. You have one universal hit with Wonder Woman. Only one. You still need to make strategic decisions, like getting Dwayne Johnson, if you ever want to compete with Marvel. I hope this isn't the case. I hope that there's a very good explanation for all of this, and Johnson isn't entirely out of the DC Cinematic Universe. But that's not what it is looking like right now. I'll report more once we know the larger story. 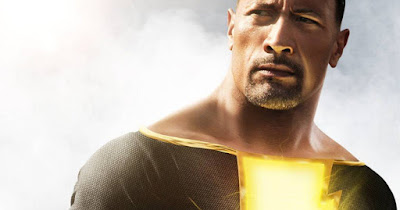 What do you think? If Dwayne Johnson isn't in Shazam, does this mean he's out of the DC Cinematic Universe? Does DC really need him? Are we making too big a deal out of this? Leave your thoughts in the comments section below.